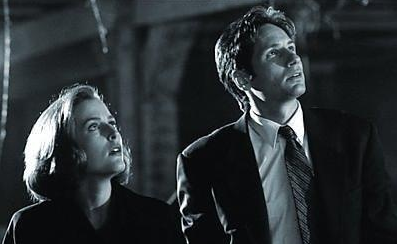 Hey, remember The X-Files? No? Can't blame you! But six years after it went off the air--and eight years after it was worth watching--The X-Files is headed for a resurrection of sorts, with The X-Files: I Want to Believe hitting theaters on July 25. The X-Files: Revelations--a two-DVD set collecting eight "essential" episodes of the series--went on sale last week, and while the usual reason for releasing DVD fare like this in front of a movie is to cash in on the film's buzz (see Batman: Gotham Knight), I'm pretty sure Revelations exists for another reason, too: To remind people that The X-Files, before its long, awkward slide into mediocrity, was a pretty fucking fantastic show.

More details after the jump.

The X-Files is unique among TV shows: Not many shows can boast such a fervent fanbase, and even fewer have angered and disappointed those fans as much as X-Files did in its final, confused, uninspired seasons. (Not to mention its forgotten, ill-advised spinoff, The Lone Gunmen.) Rather than watching The X-Files in its entirety, Revelations might be the best way to experience the show, actually--if I'd been the one in charge of the DVD's marketing team, I'd have insisted that it be called The X-Files: All Killer, No Filler! Then again, I also would have demanded that the special features include some Mulder/Scully fanfic, so it's probably best I'm not making such decisions.

ANYWAY. Here you get a reminder of why The X-Files was so kickass to begin with: Daring and weird and melancholy, The X-Files took its time to tell eerie, smart stories, sure, but maybe more importantly, it was just a blast to watch. It's telling that out of these eight episodes, three of them could be considered, more or less, comedies. (Granted, they're comedies about depressed psychics, Frankensteinian freaks, and Texas vampires, but still.) With its creepy, overarching alien mythology (one that, damningly, turned out to be a bust) and its ominous tone, it's easy to remember The X-Files as a standard freak-of-the-week genre horror show--but it was, in fact, something a lot more interesting and rare and cool: Something that constantly tried new things (sometimes successfully, sometimes not), monkeying with tone and style and subject matter. It's worth pointing out that the most memorable episodes (like that episode they filmed Cops-style) are the ones that're least like those that follow the usual X-Files template, and those are usually also the ones that end up as being some of the best episodes, period--not only of the series, but of TV as a whole.

With eight solid episodes, Revelations picks out some of the best of the series, even if special features are lacking. (Aside from a comic book convention panel, the lone extra feature on the release is a series of introductions to each episode by series creator Chris Carter and executive producer Frank Spotnitz. In each of these, all they really do is say, over and over, how the episode that's about to follow is one of the very best they ever did. It's like those old Matt Stone and Trey Parker South Park intros where they introduced each episode as their very favorite episode, but utterly unironic.) The episodes:

Pilot (Season One): Technically, the pilot is more "good" than "great," but it's still a pretty fantastic introduction to the show. Not only are the seeds for the show's alien mythology planted in this episode, but it's impressive to see how intact the tone and characters were, even at this early stage. Plus, it takes place in Oregon! AAAAAUGHGUGHGHAAAAHGHA!!!!!!! Etc.

Beyond the Sea (Season Two): A Scully-centric episode that features a death row inmate who makes psychic predictions. Brad Dourif's performance as Creepy McCriminal is fantastic, here, but it's the show's eerie tone that's the really excellent part about this episode.

The Host (Season Two): Arguably the most famous and beloved episode, this one deals with the Flukeman. You know. The Flukeman. It's pretty great.

Clyde Bruckman's Final Repose (Season Two): Peter Boyle (who won an Emmy for this performance) stars as a world-weary insurance salesman/psychic whose unwanted visions help Mulder and Scully solve a case. Funny and mopey at once, Clyde Bruckman is an episode that shows off just how versatile The X-Files' apparently standard genre template could be.

Memento Mori (Season Four): This is probably the weakest episode here, if only because it relies so heavily on the series' overly complex mythology that now it just seems silly and confusing. Long story short: Scully deals with her suspicious cancer outbreak while Mulder teams up with his geek squad known as the Lone Gunmen to investigate. Also, some clones or some hybrids or something show up. It's a fine episode, with some great acting, but it also reminds you of everything promising about the show that it would go on to squander. (Hopefully Lost and Battlestar Galactica learn from The X-Files' mythology bungling.)

Post-Modern Prometheus (Season Five): Maybe my favorite episode of the show, Prometheus is a couple of things: A black and white tribute to classic horror films and comic books, a loving spoof of vintage sci-fi and horror, and a pseudo-musical heavily dependent on the music of Cher. I honestly can't do it justice explaining it, but it's fucked up and amazing. If you haven't seen the episode, this is the final scene, so don't watch it, but if you have, holy shit:

Bad Blood (Season Five): Once again proving how cleverly the show's writers managed to tweak their genre formulas, Bad Blood takes a standard freak-of-the-week concept (vampires! In Texas!) and mixes it up by telling half the story from Mulder's point of view and the other half from Scully's. It's witty and quick and features a great performance from Luke Wilson, as the small-town sherriff stuck in the midst of trailer park vampires.

Milagro (Season Six): When David Duchovny threw a hissy fit and made The X-Files' production team move from Canada to L.A., it was the sign of the end: Trading in the dark, ominous Pacific Northwest forests for amber-hued urbia, The X-Files' tone changed and it lost focus. Milagro is one of the better episodes from the series' too-long fall-off in quality, and its story of a creepy writer who gets all stalky with Scully while also having something to do with some Temple of Doom-style heart-wrenching murders proves solid and entertaining, if not extraordinary.

The semi-depressing advertising campaign for the new X-Files movie claims that it's "the motion picture event that will make you believe again!" (In other words, it's "the motion picture that will make you forget about how crappy the show got and how lame and confusing the first X-Files move was!") Carter insists that the new movie will stand on its own, apart from the series' convoluted mythologies--here's hoping it'll recall the best of these episodes, which not only stand on their own as excellent, accessible stories in their own right, but as examples of a show that was constantly willing to challenge itself creatively. I gotta admit it: I've felt no amount of bitterness over the past eight or so years for how The X-Files TV show let me down--but after the crash-course/reminder provided by Revelations, I'll also admit that I now find myself kind of unexpectedly excited for the new X-Files movie.

Multnomah County Recommends Everyone Wears Masks Indoors, Regardless of Vaccinations