First Thursday: Not About Art

Last night's First Thursday seen was plenty bumpin, but I only went to one art show--all the to-dos (and there're more tonight!) are in celebration of Portlands newest boutiques. Yes, really. Joining the other brave small business-owning souls who have clustered around the economic comfort of the Ace Hotel are no less than two new additions: Last night's opening celebration for Radish Underground was packed (and curiously, featured vegetable trays with purple cauliflower and heirloom carrots, but no radishes?!), with the jovial crowd balancing wine glasses with one hand and pawing through the selection of hip-yet-comfortable pieces heavy on the organic cotton with the other--this is your new go-to spot for the hoodies you live in (unless you're Brett Glass), BTW. The opening ceremonies for Narcisse are actually, technically scheduled for tonight, but I popped in last night to soak in the grown-up goth sophisticate look the store so deftly provides for, its deep eggplant walls lined with the costumes of your most tasteful cosmopolitan vampire fantasies. On the other side of Burnside, Filson's VIP sneak preview party exceeded my expectations. The venerable outdoor/hunting/fishing gear company based in Seattle (where they still manage to do some of their production, astonishingly, although I saw a fair share of Made in Mexico/China tags, too) is making its first foray into Oregon. My first thought is "Why betray Pendleton?" but the truth is there are fewer points of intersection than I realized. (Although here's something gross that Pendleton did.) Filson's great strength is its jackets--in heavy wools, leather, and thick canvasses, impervious to weather, flatteringly cut, invariably equipped with more-than-ample pockets, these items of attire hover in the $250 range, will probably still be in good enough condition for your grandchildren to inherit, and laugh in the face of rain. I want one. Actually, I specifically want this one: 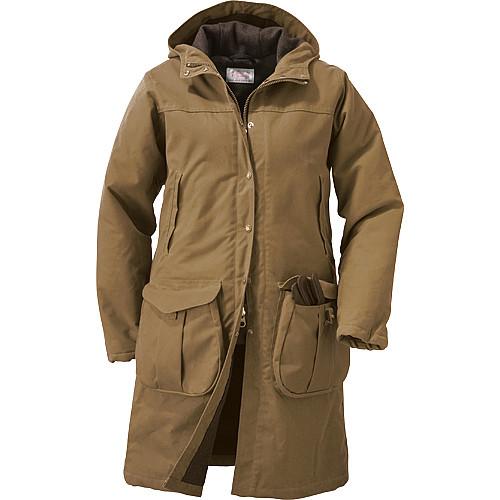 You can't tell in this photo, but it's incredible how figure-flattering this jacket is, despite its utilitarian bulk. This thing fits me like a dress. Size extra-small, please. See you at Christmas.

This is possibly the only clothing store in existence that would give my rural-Idaho-dwelling/hunting/fly fishing/search and rescuing/volunteer firefighter/EMT brother and I equal cause for enthusiasm. And if I ever need to move to the woods, I know where to find camping-proof garment bags. Coincidentally, days before I received my invitation to the opening, I read about Filson for the first time in the New York Times style section:

Like the Levi's jeans that designers as unalike as Yves Saint Laurent and Calvin Klein referred to as the most nearly perfect article of clothing, the Filson tin cloth jacket dates to the time of a Gold Rush, in this case the race for glittering ore in the Klondike at the end of the 19th century. It was in 1897 that its founder opened C. C. Filson's Pioneer Alaska Clothing and Blanket Manufacturers to outfit fortune seekers stampeding to Alaska. He made jackets and blankets, as well as boots and shoes for miners like the one whose diary recorded that even by amplifying the sensation of "the most bitter ice blast that has ever pierced your marrow" a thousand times, one could still scarcely conjure the depth of a springtime chill in the Chilkoot Canyon, never mind the bitterness of midwinter on the Yukon.

Manhattan rarely sees conditions like that or, for that matter, weather that calls for a coat of oil-finished cloth to ward off chilblains. But that is no deterrent to certain knowing fashion insiders, who form a small cult of worshipers of clothes from the Seattle retailer.

"There's an editor here who's obsessed with Filson," said Kim France, the editor of Lucky, the shopping magazine, and the author, with Andrea Linnett, of the newly published "Lucky Guide to Mastering Any Style." "There are all these great standbys that don't really have anything to do with the lifestyle we lead here in New York and are totally underappreciated," she added, referring to things like Red Wing engineer boots, Aran sweaters, Barbour jackets, Sperry Top-Siders, Woolrich jackets, Alden cordovan loafers and Pendleton shirts.

Start appreciating, Portland... the new store is officially open on the 15th of this month!

More store openings and other fashion scoops on MOD.