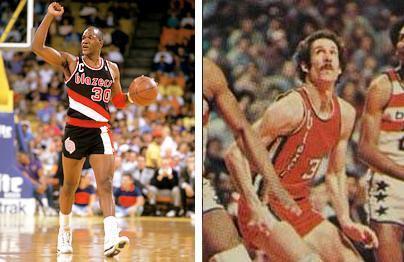 #30 is headed to the rafters. The Portland Trail Blazers have just announced that they are retiring the #30 jersey of Terry Potter, and the same numbered jersey of Bobby Gross, a former starter for the famed 1976-77 NBA Championship team.

A number so nice that they had to retire it twice.

The dual ceremonies will take place over a pair of nights, December 16th and 18th at the Rose Garden. Also, it should be noted that famed blogger Ben Golliver of Blazers Edge has been leading the campaign to retire Porter's jersey for quite awhile now, so congrats to him as well.

Full press release after the jump. Speaking of jump, look at the hops on a young Terry Porter.

PORTLAND, Ore. – The Portland Trail Blazers will raise jersey number 30 to the rafters not once, but twice, during December ceremonies to honor the Trail Blazers contributions of Terry Porter and Bobby Gross, the team announced today.

Portland’s #30 will become just the third NBA jersey to be retired on behalf of multiple players. New York’s #15 honors both Dick McGuire and Earl Monroe. Boston’s #18 hangs in honor of Dave Cowens, and was previously worn by Jim Loscutoff, who had asked that the number remain in use.

“We are proud to honor our rich tradition by celebrating two men who put #30 front and center for many of this franchise’s finest moments,” Trail Blazers President Larry Miller said. “Terry and Bobby embodied what it means to be a Trail Blazer, on and off the court. We are thrilled to celebrate their contributions to the franchise.”

Porter “gave everything he had”

On December 16, at Portland’s 7 p.m. contest vs. the Sacramento Kings, the Trail Blazers will honor Porter, a 6-3 point guard who played in Portland from 1985-95 and averaged 14.9 points and 7.0 assists per game during his 10-year tenure with the Trail Blazers.

A two-time All-Star, Porter remains the all-time assist leader (5,319) and second-leading scorer (11,330) in Trail Blazers history. He is among the franchise’s all-time leaders in nearly every significant statistical category, including games played (758; 3rd) and minutes played (23,978; 2nd).

Currently the head coach of the Phoenix Suns, Porter, 45, joined the Trail Blazers in 1985 as a first-round draft choice (24th overall) out of Wisconsin-Stevens Point. The second-leading scorer on Portland’s 1990 and 1992 Western Conference Champion teams, Porter also had stints in Minnesota, Miami and San Antonio during a stellar 17-year NBA career.

“The Trail Blazers organization gave me my chance and believed in me when 23 other teams did not, so they will always be special to me,” Porter said. “But this caps it off. I am honored and moved that they feel my jersey should be retired.

“My whole basketball career has been about working hard every day and giving myself the opportunity to be the best player I could be. I would hope that Blazers fans would remember me as a player who gave everything he had when he stepped on the floor, competed, and represented the city and state to the best of my ability.”

Gross “just tried to fit in”

On December 18, during the Trail Blazers’ 7 p.m. contest vs. Porter and the Suns, the team will honor Gross, a 6-6 forward/guard who was a starter on Portland’s 1976-77 NBA Championship team.

Gross, still a resident of the Portland area, averaged 9.2 points, 4.5 rebounds and 3.0 assists in seven seasons with the Trail Blazers from 1975-82.

The Long Beach State product, a second-round pick (25th overall) in 1975, is best remembered for his superb play during the 1977 NBA Playoffs. Gross averaged 14.1 points, 5.9 rebounds and 4.2 assists while shooting a scintillating 59.1 percent in 13 playoff games.

He saved his best for the Philadelphia 76ers in the NBA Finals. In the six-game series, Gross averaged 17.3 points, 5.7 rebounds and 3.5 assists, hitting 46-of-69 field goals (66.7 percent), and punctuating his efforts with a team-high 24 points and 8 rebounds in the decisive 109-107 win that gave Portland its only NBA title.

“Even now, when people talk to me, they want to talk about one series, the Philadelphia series,” Gross said. “That’s what they remember.

“I’m very honored, and I’ll be in good company with Terry. I didn’t expect this ever to happen. I was somebody who deferred a lot, and just tried to fit in. Making sure everything ran smoothly was what was important to me.”

Tickets are available for both games at the Rose Quarter box office, at TicketsWest outlets, by calling 503-797-9600 or visiting Trailblazers.com. Suite rentals and group ticket opportunities for parties of 10 or more are also available at 503-797-9600.

Additional tickets may become available if released from group hold. Subscribers to Ticket Alert would be notified on Nov. 24 of immediate pre-sale opportunities. Remaining tickets would be available to the general public on Nov. 26.

The number 30 will be the 11th jersey to hang from the Rose Garden rafters, and the first to be retired since Lionel Hollins raised #14 on April 18, 2007.

The only other team to take the #30 out of circulation is Indiana, which retired the number on November 2, 1985, in honor of George McGinnis. McGinnis started opposite Gross in the 1977 Finals as a member of Philadelphia.

Gross is the seventh member of the 1977 NBA champions to have his number retired by the Trail Blazers.