Personally, I've always liked the plain entrance to the World's Greatest Bookstore, but Powell's is in the midst of revamping their Burnside and 10th entryway into an iconic "gateway to the Pearl District." The architect of the redesign (Ernest Munch - who designed Powell's sleek Beaverton and airport outlets) pitched a proposal to the Design Review Commission that would replace the low, one-level exterior with three levels and also construct a 15 foot rotating "Art Cube" on the storefront. Here's how the Daily Journal of Commerce describes the new concept:

If Munch has his way, the new face of Powell's will be cubist. Just over the entrance of the bookstore, Munch has proposed a giant cube suspended over the awning. The approximately 15- to 18-foot cube would be a showcase for art, displaying art on several sides, according to Munch. 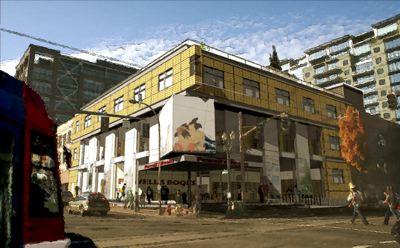 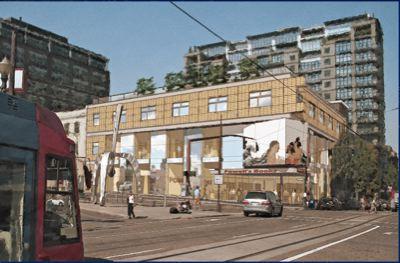 The front entrance to Powell's would be closed while they redid the facade, but, don't worry, the store itself is going to remain open during construction - you'll just have to use the Couch doors.

This tall, bold entrance would definitely change the whole feel of Powell's. From the front, the famed bookstore is currently so unassuming - people I bring by are always surprised to find the store is so big inside. The design itself is pretty Portland: keeping this world-class bookstore behind a completely unambitious facade. This new front is more glamorous, definitely, Powell's is aiming claim its title.