Downtown Cop Gets Another Ticket

An attorney who fined a cop $35 for parking illegally back in July has issued another citation to the same cop, for the same reason. Eric Bryant's story went as far as CNN over the summer, when he used an obscure Oregon law that allows one citizen to give another citizen a parking ticket, to target Portland Police Officer Chad Stensgaard, who was parked outside a restaurant at the time. You can see photos from the court case here.

Bryant was monitoring police vehicles outside the bureau's central precinct headquarters in October when he saw a Police car parked in the "Government Vehicles Prohibited" spot on the North Side of the building: 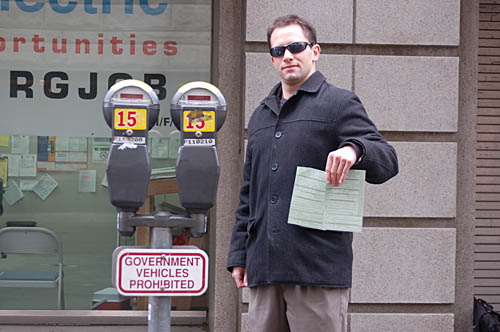 THE ENFORCER: Bryant with his two latest officer tickets...

Bryant did a public records request with the Portland Police Bureau, asking for the Uniform Daily Assignment Roster, to find out to whom the vehicle was assigned on that day. It turned out, the officer was allegedly Officer Chad Stensgaard, says Bryant, who has gone ahead and filed the requisite paper work at the courthouse. Officer Stensgaard now has 60 days to respond to the ticket.

Bryant has suffered his fair share of negative publicity over the first ticket, but says he understands why the cops might be inclined to target him personally over the tickets, "because they can't win on the facts..."

"I made it my goal to eliminate this daily practice of illegal parking, and people who break the laws are sometimes annoyed by people who enforce them," says Bryant.

Ain't that the truth. We'll keep you informed about Bryant's case as it progresses...having lived in Portland four years, Bryant was somewhat surprised to be pulled over for the first time by a police officer, the day after winning his first case against Stensgaard. "It was certainly quite a coincidence," he says.

"Mr. Bryant is trying to make it look like all police officers are lawless in their parking when in reality for decades the Portland department of transportation's parking enforcement department has had a standing informal agreement with the police bureau to defer to the bureau's internal policies when it comes to enforcement," says Cop Union boss Scott Westerman.

"Mr. Bryant has got a bone to pick and he's got the right to do that," Westerman continues. "But he's on a crusade, he was camped out at the parking garage next to the police bureau. All he's going to do is force the city into creating formal legal exceptions for Police Officers, which he's not going to like."

"The reality is, the general public has an expectation that police officers will respond to an emergency," says Westerman. "Mr. Bryant has, in fact, tapped into an area where the city has been complacent for decades. But I don't think he is going to like the results."

Update, 4:30pm: Bryant says he's had a slow trickle of phone calls since this post went up, and that he plans a press conference tomorrow at 12:30pm at the spot where Stensgaard's car was allegedly parked. He also feels it's important to stress that he does not feel that his being stopped the day after the original court case with Stensgaard was retaliation. "It was suspicious, but I don't honestly think there was a connection," he says.