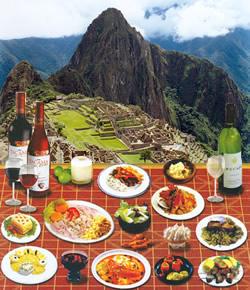 This time the food trend predictions are coming from Food Channel.com, who drew on the resources of The World Thought Bank and an organization called (a bit ominously, if you ask me) the International Food Futurists. With so many people putting their minds to the same subject, you might think they'd come up with some mind blowing ideas about what's going to happen next year in food. I'd say, however, I'd trust anyone who buys, eats, or pays attention to food to have come up with these trends. I'll just touch on a couple that sparked my interest.

1. Home on the Range - The return to home cooking is no big surprise. In a downsized economy, people will be spending more time eating at home. The difference is, they know a lot more about cooking than they used to and want to apply that knowledge in the new economy. They’ll be learning more about cooking and flavors, turning to online sites and TV cooking shows, taking cooking classes, and sharing family recipes.

You see, this is why I've been putting so many recipes in the food issues. The way I figure it, I've got all year to write about restaurants. So, when I'm given the space to give readers an opportunity to get into their kitchens, I am all over it. Plus, it's generally cheaper than the latest chi chi joint with their fancy locally sourced haricot verts and whatnot.

4. Living La Vida Locavore - This is all about eating locally, whether you are at home or patronizing a local restaurant that buys from local farmers.

There was actually a fairly interesting kerfuffle surrounding the locavore issue this year. Some scientists and economists were saying that it isn't actually better for the environment to get your veggies from your friendly Community Supported Agriculture farm. The reason? Well, the deliveries are generally less fuel efficient, in terms of fuel/mileage/amount of produce, than major veg suppliers who carry far more food with far less fuel. the upshot being that big ag. veggies are cheaper and more environmentally friendly than small ag. veggies.

Locavores shot back, basically saying that the theory was bullshit because there are big hidden costs to those cheap big ag. veggies that throw the whole equation out of whack. They argued that when you add in the amount of shit that goes into growing a big ag. tomato (pollutants, collateral health damage to the community because of pollutants, etc.) the cost for that tomato is actually higher than you might think. Plus, small ag. tomatoes taste better; so, go fuck yourself. I'm paraphrasing, of course.

6. FrankenFood - This has several components, including the rise in bioengineering, more genetically modified food and a merging of last year’s trend toward functional food.

This actually frightens me a bit. I think the only thing that should be allowed to fool around with mother nature is mother nature herself. The idea of a cucumber (hypothetically) being genetically modified to help ease my heartburn is just... wrong. Turning food into medication is a bizarre idea. I mean, we can already help our health outcome through food by simply eating rationally. The last thing we need is to give people magic frankenfoods to cure their ills. This path leads to more obesity, more diabetes and some scary shit I don't think anyone could possibly plan for.

10. Where in the World . . . - . . . is the next flavor trend coming from? It’s all about globalization and variety now. While we’ll be making fewer trips abroad this year, we’ll still want to taste what’s new and exotic.

I love that Peruvian cuisine is getting so much truck in the food media these days. After what I've experienced around town this last year, Peruvian flavors have become some of my favorites. Though there is a severe lack of Guinea Pig.

I will note that some "trying to create exotic flavors in the kitchen," went down at my house just last night. Kitty and I were trying to re-create an Ethiopian kale dish that we'd eaten at Bete-Lukas. Working from flavor memory, without a recipe or net (my favorite way to cook), we stumbled upon a great way to prepare kale, even if it failed to resemble the dish we'd eaten. Still, it was delicious.

How 'bout you? Any Blogtownies care to lay down more food trend predictions before the new year, or comment on those you've sen here? Why then, go ahead.

Multnomah County Recommends Everyone Wears Masks Indoors, Regardless of Vaccinations