It might be. I wasn't going to do one, but then I realized that in not posting a list, I'd be depriving you internet folk of the opportunity to weigh in. And it's really about all you. So here, in no particular order and with very little forethought, are some books that I liked in 2008. 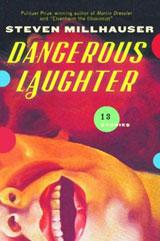 The Flying Troutmans by Mirian Toews
Toews is a frank and likable writer, and her empathetic rendering of the road-tripping, dysfunctional Troutman family made me want to read every book she's written. (That impulse led me to A Complicated Kindness, which is even better than Troutmans, and highly recommended.)

Paper Towns by John Green
I am aware that this book was written for 12-year-olds, but I found Green's account of a young man coming to terms with the basic humanity of the girl he loves to be hilarious and insightful. Perhaps that reflects poorly on me.

Northline by Willy Vlautin
If you haven't yet read local author—and Richmond Fontaine frontman—Willy Vlautin, I DO NOT KNOW WHAT IS WRONG WITH YOU.

Dangerous Laughter by Stephen Milhauser
Dense and hilarious; handily the best short story collection I read all year. (Though to be fair I am still working on The Boat.)

"Alas" by Brian K Vaughan
While it was hard to see Vaughan's Y: The Last Man series end, this issue was a fitting conclusion. Erik says it good here.

How Fiction Works by James Wood
Better titled How James Wood Reads—and I felt like a better, more attentive reader after finishing it.