Downtown cops and business advocates began a push for tighter laws on involuntary commitment for people suffering with mental illness at a meeting at city hall this morning.

I wrote in depth about the civil commitment process, here in Portland, last February, but the bottom line is, that there are laws in Oregon that allow the government to involuntarily hospitalize someone whose mental illness makes them an imminent danger to themselves or others, or who is unable to take care of their basic needs. And there was talk of pushing in Salem for those laws to become stricter at a meeting of the downtown Public Safety Action Committee this morning.

There's no doubt that times are going to be tough in Portland on this front over the next year. For a start, Governor Kulongoski's proposed budget cuts the state alcohol and drug treatment budget by 83 percent; and cuts community-based mental health services by 90 percent. That means that people whose basic needs would have been met by some of those services are more likely to end up roaming the streets in states of distress and crisis—which is unlikely to do anybody any good. 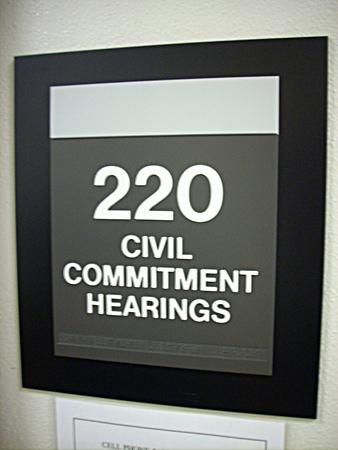 Now, in response to a reported rise in suicide attempts in downtown Portland, the PSAC group has written to City Council in support of pushing the state legislature to make involuntary commitment statutes tougher.

"Is there a reason there's no diminished capacity clause in our statutes so that we don't have to wait until they're imminently dangerous so that we can do something?" asked Old Town cop, Jeff Myers.

"I'd like to see it changed," said Jean Dentinger, the county's supervisor of involuntary commitment.

Dentinger quoted the Washington state laws on involuntary commitment, which have a lower standard of proof, merely to show that a person is "gravely disabled," she said. There seemed to be consensus around the table that a statute closer to Washington's might be more favorable, here in Oregon. Read all about it, after the jump.

"I understand that in the 60s and 70s, mental health facilities were not perfect, but the solutions that we've put in place now seem to be worse," said John Hren, boss of private security firm, Portland Patrol, Inc, who said one of his officers was recently assaulted by a mentally ill man who had just got out of hospital. "Very clearly this guy has issues, mental issues, but we can't get him into the system," Hren continued. "The system is broke in this country."

"We're very concerned about some of the [commitment] court's rulings," said Central Precinct Commander, Mike Reese. "People who are very dangerous and are threatening suicide or other people around them, and there's nothing we can do. It's like throwing a hand grenade out there and waiting for it to go off."

Dentinger also blamed cuts in the District Attorney's budget for attorneys to work on prosecution in the commitment court for some of the rulings—currently, the court is staffed by deputy DAs in training. "We don't have any full-fledged lawyers," Dentinger said. "Whereas on the public defender's side, there are some very skilled attorneys. It puts us at a huge disadvantage."

Reese asked whether the court might be suffering from an increase in advocacy by the defense bar, and Dentinger agreed that the court is "extremely legalistic. I've had people go free because a box on a form wasn't checked," she said.

"So the court is not necessarily doing what's right for the person," said Reese.

Mike Kuykendall, the vice president of downtown services for the Portland Business Alliance, and co-chair of the PSAC committee with Trujillo, was supportive of the move to lobby hard in Salem for a change in the law.

Leaving aside the civil rights implications of pushing for tighter civil commitment statutes, there's a likely financial impact to doing so that was not discussed at this morning's meeting.

"But if they manage to do that, there's a financial impact," says Jason Renaud, of the Mental Health Association of Portland. "And these business people have not been very good at getting more money for mental health treatment in the past. We'd be glad to see more beds available, but as soon as we have talked about more money in the past, the business folks have tended to walk away from the conversation."

"The thing is, too, that if we had more money for mental health treatment in the community, these sorts of things would not be necessary," Renaud continues.

On the other hand, let's hope that the slashed budgets and increased pressure on law enforcement and private security to pick up the pieces doesn't result in another tragedy in Portland.