Mayor Sam Adams issued an apology to 9 TV cameras and more than 30 journalists in the Rose Room on the third floor of City Hall this afternoon, for lying about the nature of his mentoring relationship with a former legislative intern, Beau Breedlove. Adams had previously denied their relationship was sexual, but admitted to the Willamette Week yesterday that he lied about that—today, he said he had had a sexual relationship with Breedlove for "about two months," which began about a month after Breedlove's 18th birthday.

"I think this is fundamentally an issue of a public official lying," he said.

Adams was asked if he lied to get elected. He stuck to his line about lying to counter lies spread by Bob Ball, a real estate developer who had planned to run against him for mayor.

Asked whether he expected to get away with his behavior, Adams responded "it's not entirely up to me."

"I pride myself on telling the truth, and my word is very important to me," he said. "I am very ashamed, humbled, and humiliated, and I think that's absolutely appropriate."

Adams said he would resign if it became clear that it was not in the best interests of the city for him to remain mayor.

"This is the modern age," he said.

Asked what Breedlove needed mentoring in, Adams said "he needed help getting into politics."

Adams said Breedlove had never consumed alcohol while they were dating, and that he had not found their relationship "compelling" due to the age difference. He said the relationship ended of its own course, because he was dating a number of people at the time, having just ended an 11-year relationship.

"I know I have a lot to do to restore the public's trust," Adams continued. "But I would ask the public to consider this anomaly in the context of my two decades of public service."

Asked about the recall effort currently under way, Adams responded: "Listen, this admission, I understand it is shocking, and that people are angry about it, I understand that, and that might lead to a recall and it's the public's right to do that. It's my job to apologize, and be sincere about it."

"I apologize for lying, and to Beau for asking me to lie for him," said Adams. "I also apologize for partaking of this at a time when the services and programs of government are needed most."

Adams apologized to Portlanders "for embarrassing them." 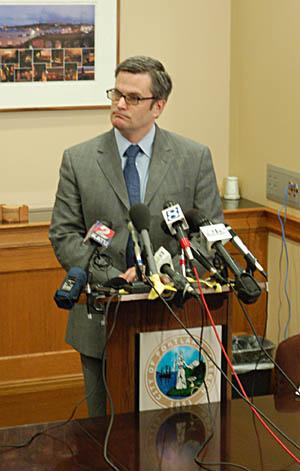 Adams said he had no plans to resign, but that his job is to come clean. "I mucked it up," he said.

A reporter said Commissioner Randy Leonard has expressed his concern about the affair and that he wants an independent investigation launched into the incident. Adams said his calendar, email and phone records for the period in question would be made public, and that he had called Leonard to apologize for lying to him about his relationship with Breedlove.

"I don't think an apology in and of itself is enough," Adams continued. "I'll be subject to greater scrutiny because of all this."

"I lied at the time because I was concerned that untrue rumors being circulated by an undeclared campaign opponent for mayor that said I had broken the law involving sexual relations with a minor were being circulated, but that is not a good excuse," said Adams.

"Although my relationship with Beau was legal and consensual, because of my position in the community and because of the difference in our age I also want to acknowledge that it was inappropriate for me to have a sexual relationship with an 18-year-old and I want to apologize for having done so," Adams continued.

The Portland Police Association's Mitch Copp said the PPA is "disappointed" with Adams, and asked for his resignation. Kopp said Adams' behavior presented an opportunity for "blackmail." 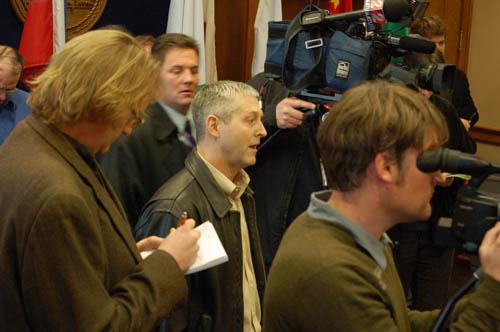 Adams was asked if he had ever fired anybody for lying. He said "I don't recall."

Adams was asked what consequences he would face besides coming clean. "Well, I'm facing them," he said. "I'm being held accountable, which is appropriate, and my reputation is impacted, my friendships have been impacted.

Adams said he would like to apologize to Breedlove's parents. "I've got a lot of people to talk to and apologize to," he said.