"Now is not the time to focus on a sex scandal, there's so much else to be focusing on," was the message delivered by Pink Martini founder Thomas Lauderdale at a chaotic city hall press conference at noon. Lauderdale also said he "knew for a fact" that Breedlove had "known exactly what he was doing" when he got involved with Adams, but declined to comment further. 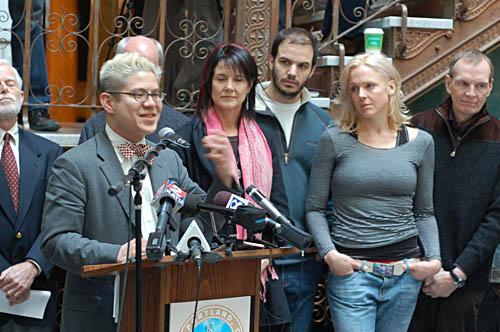 Commissioner Dan Saltzman also spoke up, saying he was "awestruck" by Sam Adams' "smarts," and that "we want to see him come back to work."

Reading a statement written by Gus Van Sant, Zoobomber Dave Terry said "Sam has been a good friend to me and a better friend to Portland. We should all do our bit to make sure he always feels welcome here."

First amendment attorney Charlie Hinkle of law firm Stoel Rives said "just because the press have the right to report on something doesn't mean they should exercise that right all of the time."

Hinkle was asked whether that meant the story shouldn't have been reported. 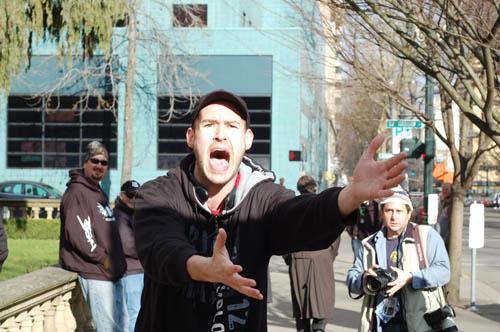 "I'm upset that all this Jesus crap has been brought into this," screamed a gentleman who gave his name, but later called the Mercury asking not to be named. "I'd have to call myself a little more tolerant than these people right here."

Back inside, the press conference was ultimately cut short by Pink Martini publicist Peter Murray when the Mercury asked Lauderdale if he had a message for the counter-protesters outside. "We're done here," said Murray, walking in front of the dais.

"I'm going to lead them in a round of Amazing Grace," said entertainer Storm Large, whose earlier comment on the Adams' controversy was simply: "To err is human, to forgive is divine, Sam Adams is still my mayor." More on this, including some of the most surreal photographs you will ever see, after the jump.

Sure enough, Large led a group of eight people in a round of the hymn. The counter-protesters, who had been there since before the press conference, shouted "nice marketing," and "hypocrites!" at Large and her friends. Former Willamette Week gay columnist Byron Beck joined in with the hymn, after a few verses. 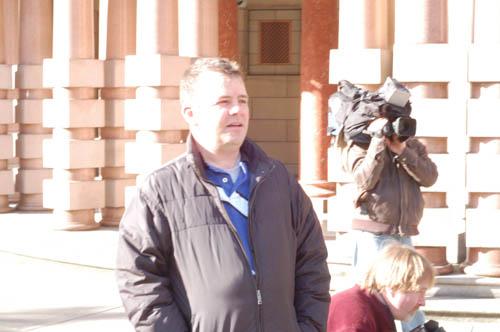 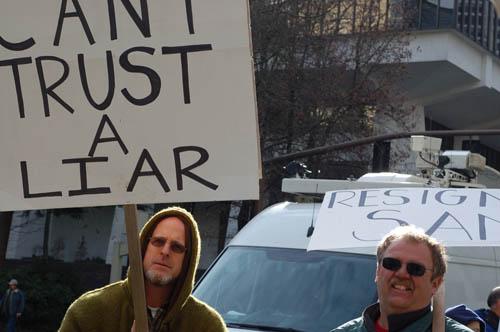 Then, Large got down on her knees. 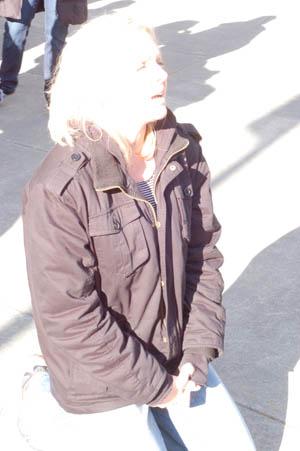 She also had a heated but respectful conversation with one of the protesters, who had a sign reading "Protect Interns From Our Mayor," before wandering off. 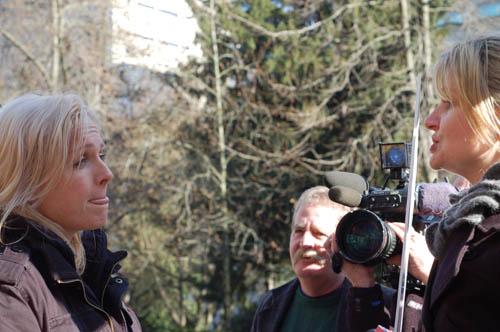 Everyone will be back at City Hall at 5:30, for a planned rally in support of Adams. Central Precinct Commander Mike Reese was seen outside the building yesterday, but had no comment on policing plans should the two sets of protesters clash.