Wherein I Interview Neil Gaiman and Henry Selick About Coraline, and Also Wherein Dakota Fanning Recoils Just a Tiny Bit as I Reach Past Her to Hit an Elevator Button. 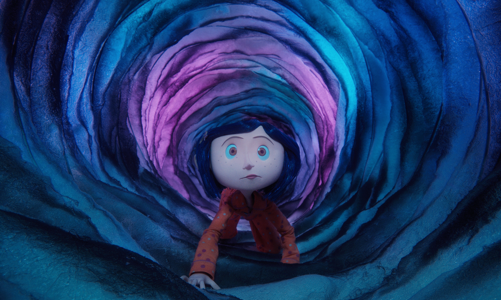 When I woke up this morning, I did not think to myself, "Hey, today's the day I'm going to awkwardly push past Dakota Fanning in order to hit an elevator button!" And yet.

Leading up to Coraline's red carpet premiere tonight at the Schnitz (the film's kicking off the Portland International Film Festival, which you can read more about here), there was a press junket at the Heathman Hotel. Junkets, for those not in the know, are more or less the most hideous things on Earth.

Their hideousness is not solely the fault of the publicists involved, nor of the interviewees, nor of the interviewers—I think it's just due to the nature of the entire goddamn thing as a whole. The idea for a junket is to take all the talent from a movie (in this case, Coraline director Henry Selick, and Neil Gaiman, on whose book the film is based, and actress Dakota Fanning, who provides Coraline's voice) and trap them, I assume by some sort of cunning trickery, in one location. Then, publicists shepherd in and out members of the press as quickly as they can in order to conduct as many interviews as humanly possible. There is much last-second panicking, and much anxious preparation, and—due to the sheer number of softball interviews being conducted—there is usually very little to be gained from anything that anyone says. Also, there are snacks!

ANYWAY: Selick and Gaiman, after the jump. Discussion topics include, but are not limited to: Scaring little kids, why Wes Anderson can suck it, and armies of angry zombies. 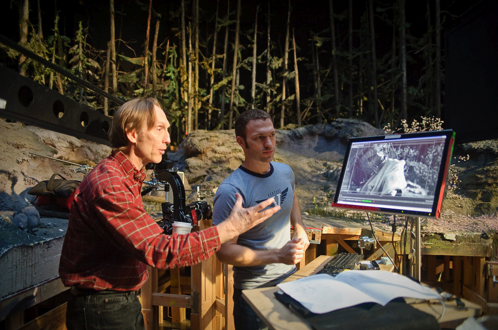 Genius stop-motion animator Selick, who also directed The Nightmare Before Christmas and James and the Giant Peach, has been working on Coraline, in one way or another, for almost a decade—ever since he got an early copy of the book in 2000, he says he's been "writing on it, working on it, dreaming up images."

Getting the book wasn't by accident, either. When I ask Gaiman how involved he was in the film's production, he replies, “I was as involved as I needed to be, which is to say that I picked Henry. I finished the book, I gave it to my agent, and I said, ‘I want this on Henry Selick’s desk.’ Henry sent me a script. My notes to Henry’s first script were, ‘It’s too faithful, Henry.’ My notes to Henry’s second script were, ‘Yeah, that's pretty good.'"

“Just like [with] the book, I’m in agreement with Neil that it’s not necessarily for the very young," Selick says of Coraline's often creepy, sometimes unsettling content—which isn't the status quo for American animation, which (Selick's and Pixar's films aside) is usually (A) bland, (B) juvenile, (C) crappy, or (D) all of the above. "Neil writes for two audiences—the younger one and his hardcore, adult fans," Selick says. "But he doesn’t dumb his stories down—he just mainly makes the protagonists kids, and it's the same sort of twisted, inventive, beautiful stories." If you wouldn't have guessed from Nightmare, Selick's a pretty perfect match for this stuff. “I know that kids love to be scared," he says, "as long as things do work out.”

But despite his love for Gaiman's book, Selick had a hard time finding a studio that felt the same way—so in the meantime, he worked on projects like Wes Anderson's The Life Aquatic with Steve Zissou. Selick and Anderson even thought about doing another project together. “We discussed my heading up animation on a film that he wanted to so since he was a kid—Roald Dahl’s The Fantastic Mr. Fox," Selick says. "So that was bubbling along and looking pretty good, and he was going to write the script for that with this writing partner, Noah Baumbach.” But then Selick got a call alerting him that Portland's Laika—formerly Will Vinton Studios—was undergoing a major shift, and that they were interested in having him direct a CG short, Moongirl. Selick took the gig, with the hope that Laika might be up for Coraline after Moongirl was finished. And after "a lot of hurdles, a lot of rewrites," they were. “Things fell together, and then [it was] just this simple matter of spending the most intense three and a half years of my life on actually making the thing," Selick says. "The hardest part was getting people to believe in it, and a greenlight. And then making it was insanely hard, but it’s kind of what I do.”

“And Wes Anderson’s still mad at me," Selick adds. "But I said, ‘Wes, I worked on Coraline before I ever met you, and this opportunity’s come.' And I did recommend his animation director, Mark Gustafson, who’s a top commercials director from Laika. So he got a very good person to work with him.”

(It was at this point that I told Selick that, as successful as Anderson has become, the dude can probably get over the fact that Selick bailed on him. I might have used the phrase, "Wes Anderson can suck it." This might be why I'm not often invited to do very many interviews.)

But back to Coraline! When the timing was right for Laika to make Coraline, the timing was also right to shoot the film in 3-D—a commercial move, sure, but also one that Selick sees as the natural progression for stop-motion animation. "Even going back to Nightmare Before Christmas, there were a couple of members of the crew who would shoot 3-D stills," he remembers. "There was like one place in the country where you could send them off, and they’d be mounted in cardboard, [and] you'd look through a special viewer. And it was just beautiful—it was really capturing what we had in front of us, which, with stop-motion animation, is real stuff. That’s what makes it different. There are many things it can’t do, but underneath it all, it’s tangible, [it's] real objects being lit and manipulated by artists. So it always felt like [3-D] would be the best way to capture a movie."

By the time Coraline was about to go into production, computer animated films had also become utterly ubiquitous—meaning a film like Coraline, with a distinctly different look, had a good chance of standing out. "I wouldn’t say [people were] tired of CG," Selick says, "but it was no longer the brand new thing, and stop-motion was looking interesting again. And finally, the story itself was looking for this sort of Wizard of Oz transition, from black and white to color—and in a more subtle way, I thought 3-D could serve that purpose, to suck the audience into the film and into the screen. With Coraline, in our early experiments, [we] pretty quickly determined that [the 3-D] was not going to be 'in your face'—that it was going to be more drawing you into the screen [and] supporting the story." In other words, sometimes 3-D works for projects, and sometimes it doesn't. "I don’t know what the overall impact will be," Selick says when I ask him about the increasing number of films being shot in 3-D. "Some people are pushing for every film [to be in] 3-D. I don’t think The Wrestler has to be in 3-D. I think it’d be a mistake—it'd be like colorizing black and white films. That's not always a good idea."

Gaiman views digital 3-D as a storytelling tool, the effectiveness of which depends on how one uses it. He should know, since he also co-wrote the screenplay for another big-budget 3-D offering, 2007's Beowulf. "I will go on record with a clear conscience by saying the 3-D in Coraline is just better than Beowulf," he says. "Because Beowulf was computer generated 3-D, and this is real 3-D—this is like a View-Master reel, which is a whole different kettle of fish....

"I think Beowulf was also a very different experience in 3-D than it was in 2-D," he adds. "Beowulf, I saw it first in 2-D, and I thought, “Oh… well, it’s a bit… it’s not what I was hoping it could be.” And then I saw it in 3-D and I thought, “Whoa. That was awesome.” And it was really interesting, the difference just in taste and texture. Coraline, I think, would probably work very well in 2-D, because it’s using 3-D in a very, very different way. Henry never throws anything at you. I think what I love best about Coraline is Henry’s use of 3-D is all about defining spaces. It’s all about things receding from you. It’s all about suddenly throwing you into a world in which this is not happening in the flat, on a screen 30 feet away from you—that screen [now] goes back 100 feet. It’s quite astonishing. And [it's] also a world in which you realize very quickly that everything is being done by hand. It treasures its imperfections. I think technically, it’s the best stop-motion film ever made. Emotionally, I think… my two lodestones for stop-motion are Jan Svankmajer's Alice and Henry Selick’s/Tim Burton’s The Nightmare Before Christmas. And I think it’s up there in that company with those two films.”

As for what comes next for Selick, he'll continue to be associated with at least one forthcoming project at Laika, though he won't be directing. He's on board to help out with Paranorman, an upcoming project helmed by Chris Butler, Selick's lead story artist on Coraline. Selick's summary of Butler's Paranorman makes me want to see it pretty much immediately: "A sweet comedy about a boy who communes with his dead grandma and ends up having to face down an army of angry zombies.”

Selick characterizes Paranorman as "another good project from Laika that stands out from the pack"—which is a pretty accurate description of Coraline, too. "Laika just happens to be a place that seems to understand you can’t play Follow the Leader," Selick says. "No one can imitate Pixar of DreamWorks and hope to win, especially when you’re trying to do films for much less money. You have to strike out, take some chances."