Back at the beginning of the summer, well-known Portland bike activist and general roustabout Reverend Phil Sano was stopped by cops for not having a bike light and wound up getting Tasered.

A guy waiting for a bus talked to the Merc about what happened:

"It sounded like he was being tortured," recalls John Henry Dale, 31, who heard Sano's screams from a bus stop a block away and ran toward the scene. Halfway down the block Dale heard "loud, sizzling electric noises" from the Taser. By that time, Sano and the witnesses say the officers were holding Sano on the ground, one's knee on his neck, and Sano was screaming.

"He was not necessarily the most acquiescent of detainees," admits Dale. "But it's my sense that these cops were using excessive force." .... According to Officer Smith's report, Smith did not tackle Sano, he "reached out to grab and stop him." In response, Sano "flailed his arms and squared off with the officer." Officer Smith apparently perceived this action as struggling and physically resisting arrest—actions which warrant use of a Taser, according to police spokesman Brian Schmautz.

Today the cop's case against Sano finally goes to court - he's being charged with resisting arrest (a misdemeanor). But Sano brought two lawyers with him to court, one to defend him against today's charges and also a civil attorney, who's taking notes to press charges against the police in case the trial swings Sano's way.

Although I've met Sano before, I didn't recognize him for a minute because of the suit. Sano was a little nervous about going to trial, but obviously not totally out of it because he remembered to hand me a flier to Mini Bike Winter as soon as I took a seat on the courtroom's wooden pews. Sano rejected an earlier community court plea where he could have pled guilty and just done some community service. "This isn't just important to me. There's a lot that's been invested in this and it's important that it comes to trial," he said, "They say that I was resisting arrest, but I'm not sure what they were even arresting me for. The nature in which citizens and police officers interact needs to be improved. We all have the right to feel safe." 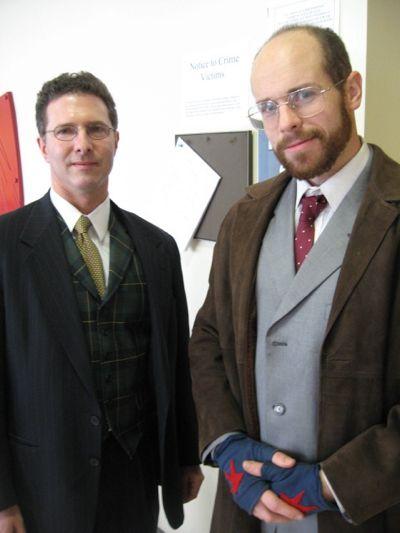 Sano, his lawyer and his star mittens (he explains: "my lady made them for me.")
This is a two day trial and it will be an important case for deciding when it's okay to Taser and what qualifies as resisting arrest. I'll blog more this afternoon and tomorrow when the arguments start.

Sidenote: What's up with the lack of bike parking at the courthouse? They definitely need to install more bike racks to meet Portland's bike arrest needs. Especially with Mini Bike Winter coming up... 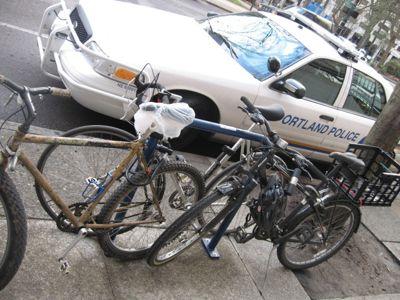