BREAKING NEWS, guys. It's a point of pride and/or chagrin in Portland that we have the most strip clubs per capita of anywhere in the country, but that rumor is statistic mostly just because everyone says it's true. Okay, rumormongers, read it and weep: John Voge, editor of adult industry trade mag Exotic says Portland has lost its place at the top of the strip club pole.

I asked Voge to dig up some figures on the number of strip clubs in Portland for the story I wrote this week about Montavilla residents discussing special zoning laws for adult stores in Oregon. He returned with some shocking data.

Back in 2005, Portland had 7.4 strip clubs per 100,000 residents, while other centers of sin, Las Vegas and San Francisco had 5.8 and 2.2, respectively. So it seems that Portland was the number one strip club champ nationally. But then, in 2006, the small town of Springfield just outside Eugene dared to challenge the title. The opening of Springfield's fifth strip club, Phil's Clubhouse, bumped the hamlet up to 9.3 strip clubs per 100,000 residents. And guess what? The state senator representing Springfield is Bill Morrisette, the senator featured in this week's article who's pushing the measure exempting adult stores from Oregon's free speech definition.

Obviously, Morrisette has much different goals than boosting Springfield's ranking in the stripper olympics. He wants to be able to zone strip clubs out of Springfield's downtown because they create a bad environment - he says prostitutes walk up and down the block in front of the downtown clubs. "It's not a matter of putting them out of business," Morrisette says of the adult stores, "It's a matter of getting them elsewhere."

As a state, Oregon isn't even the top strip club locale. According to Voge, it's West Virginia. Ouch. But, Voge points out, Portland is the only town that seems eager to claim the ranking of most strip clubs per capita, so why not just keep the crown on the Rose City? "If anyone could make the title of more strip clubs per capita look good, it’s Portland, Oregon," says Voge.

As for WHY Oregon ranks second nationally in strip clubs per capita, Voge shrugs off the typical suggestions that it's because we like to stay inside out of the rain. "When you get down to the solid facts of why we are so fortunate to enjoy such variety and diversity in adult entertainment in the Beaver State, you can thank the Oregon Constitution," says Voge, "For the most part, Oregon voters have been relentlessly unwilling to weaken a constitution that provides one of the most liberal free-speech protections in the country." 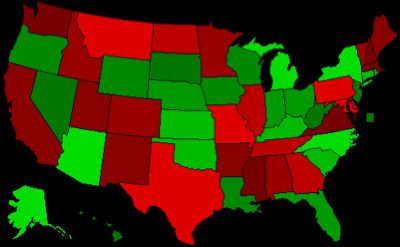 I'm with Voge on the reasons why some states have more strip clubs than others. Local zoning laws and state definitions of obscenity are way more likely to decide the number of adult stores that open shop than predominant religion, political party or the number of rain clouds in the sky.