Patton Park Apartments, the first affordable housing development along the MAX Yellow Line, has mounted its neon sign and today at 6pm will invite the neighborhood to come in and take a look around. 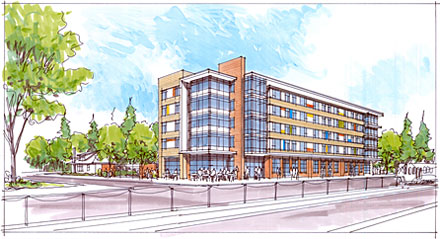 The housing development is a joint project by REACH Community Development and TriMet, who purchased the land back in 2004 when the Yellow Line was completed under budget. The complex, located at N. Interstate and Emerson, is built on what used to be home to the Crown Hotel, a place better known for its enormous sign and shady character than a sense of hospitality. The hope is to provide long-time North Portland residents with an affordable place to live, despite climbing rent and gentrification, as well as to give local businesses a boost by increasing the number of residents nearby. With its illuminated sign and family sized apartments, the development is part of an effort to revitalize the old North-South corridor, but still maintain the culture and architecture of the area. Already, the housing development, which is comprised of 52-units, has a waiting list of 400 people, indicating that these kinds of housing developments may continue to pop up.

Open House from 6-8pm. Artists Isaka Shamsud-Din and Mo will be unveiling artwork commissioned specially for the Patton Park Apartments at 7.