Those pushing for MLS to come to Portland are proposing to charge $33.65 a ticket in 2011. Here's how that compares to other league ticket prices in 2007: 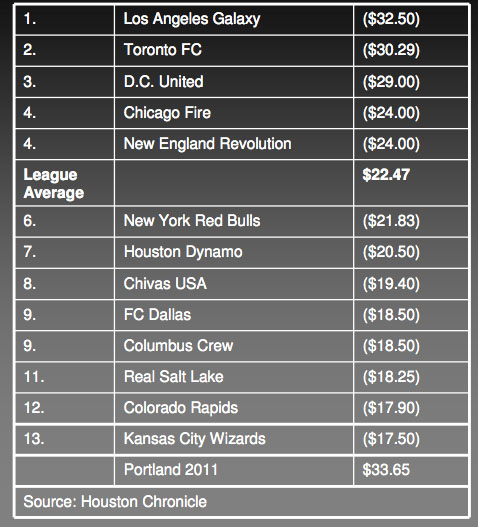 Portland Economist Eric Fruits has kindly done the math on these numbers for the Mercury—Fruits lists service on the Mayor's economic cabinet on his resume. Nevertheless, he thinks $33.65 is pretty optimistic. To compare apples to apples, he reduced $33.65, the projected 2011 price, by 4% inflation a year, to scale it back to a 2007 price of $28.76.

"The cities that charge prices that high are large cities with higher costs of living," says Fruits. "They can draw more people who have the disposable income to pay the higher ticket prices. The city of Los Angeles is bigger, in terms of population, for example, than the entire state of Oregon, which creates a much bigger draw for the likes of the L.A galaxy."

$28.76 would put Portland alongside cities like Chicago, LA, and D.C. But in reality, Fruits says, Portland is demographically more similar to the likes of Salt Lake and Columbus, which were charging $18.50 a ticket in 2007. Now, based on that $33.15 ticket price (current Portland Timbers admission is $13, incidentally) 2015 projected revenues for Portland's MLS team are $14,852,200, with a profit before tax of about $3m: 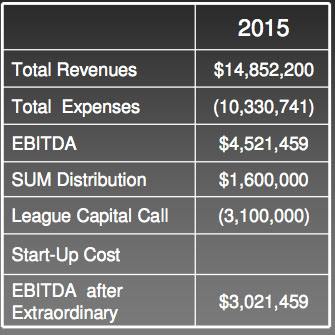 But if you cut those revenues by 30% to about $9.6m, to account for the more realistic ticket price of $18.50, says Fruits, the team suddenly goes from earning a projected profit of $3m a year to making a $2m annual loss.

"It shows you don't need to have too big a change in some of the fundamental figures to have this thing not pencil out," says Fruits. "You may have people who are willing to pay up front for the construction costs, but there's a lot less certainty about how to cover any operating losses."

"If I were a city commissioner, as the deal is, I'd vote no," says Fruits. "I'd ask the MLS people to go back to the drawing board and come back to me with some numbers that have a lot less blue sky in them."

This isn't the only potential economic drawback to any MLS deal. The Oregonian editorial board may be salivating over the idea, but if you're interested, I've got bucketloads' more local economists' perspectives, together with national studies, almost all of which are firmly negative about the idea, after the jump...

Portland may be called "Soccer City, USA," thanks to its once having had a successful soccer team in the mid 1970s, but a recent study of the viability of MLS in major US cities actually puts Portland at the bottom of the table in terms of likelihood for success: 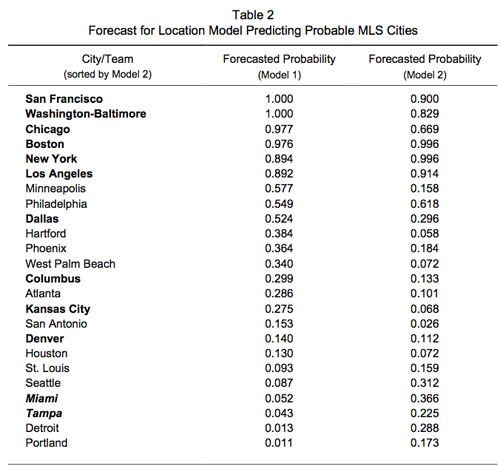 “A new sports facility has an extremely small (perhaps even negative) effect on overall economic activity and employment," says a landmark report by economists at the Brookings Institute, written in 1997. "No recent facility appears to have earned anything approaching a reasonable return on investment. No recent facility has been self-financing in terms of its impact on net tax revenues.”

So...I spoke to a few more Portland economists to find out their views of bringing Major League Soccer here. None of them were exactly overwhelmed with the greatness of the idea.

"I'm a soccer fan myself," says Joe Cortright, of Impresa, Inc. "My family goes to a few soccer games a year, and it's a nice amenity to have. But in terms of it being an amenity, I'd treat it like any of the other amenities in Portland—the city's parks, its microbreweries, transportation, and so on. I'd look very carefully before putting any public money into it because money that's used for this is then money that can't be used for other things like schools, parks, and so on. There are tradeoffs."

"Is it a good idea? I think it's a good idea," says economist Bill Conerly of Conerly Consulting. "But then I'm a season ticket holder to the Timbers and I love soccer. However, the second question is, is there an economic stimulus involved? Well, the supposed benefits to this are overstated, and the costs are very real. I'd vote no, if I were on city council. I'd be very encouraging to private money, but not want to invest any public money. I'd put very little credence in any impact analysis that has been done for this project, because there are some experts who get the business precisely because they'll give the right number. But the university people who've looked at this without being paid to have almost all come up with very negative numbers."

"You know there's a lot of stuff going on in the economy at the moment, and I just don't think this is the most important," says John Mitchell of M&H Economic Consultants. Mitchell is the former chief economist for US Bank. "It's a question of prioritization at this point in time. Obviously there's the impact of construction jobs, but that's short term. And as far as the opportunity for growth goes, you're just moving stuff around inside the Metro area."

Every single economist I've spoken to echoes the findings of the Brookings report: That Major League Soccer would not bring more money to Portland from outside. Instead, it would simply mean that money spent on other entertainment, like going to the movies or to a restaurant, would be spent on tickets to the game.

"$100 to $125 for a family of four to go to the game is a pretty aggressive projection, right there," says Fruits. "But you're just moving the money around locally. There's very little to suggest that the money would be coming from outside the Portland region."

So: Major League Soccer, subsidized by City Of Portland=bad idea. Yet despite all this negativity, the Brookings report is philosophical about sports continuing to be subsidized by local and state governments. Unless...

"The final potential source of reform is grassroots disgruntlement that leads to a political reaction against sports subsidies," says the report. "Stadium politics has proven to be quite controversial in some cities. Some citizens apparently know that teams do little for the local economy and are concerned about using regressive sales taxes and lottery revenues to subsidize wealthy players, owners, and executives."

Still...I don't suppose any "disgruntled citizens" in Portland are contemplating a "reaction" against the big soccer idea, are they? Didn't think so. It must be frustrating to be an economist and be right all the time, but have politicians, editorial boards and the public ignore you and carry on, regardless...