Would Big Soccer Take $$$ From Poor?

"Every dollar that goes into urban renewal includes 26 cents that would otherwise be going to Multnomah county's general fund in taxes," says Multnomah County Commissioner Jeff Cogen. "Multnomah County really protects public safety and helps poor people. We're looking at a $45m budget hole right now, and to take money away from those needs at this time really calls into question what our priorities are as a community."

"The average person in this community hears urban renewal and their eyes glaze over," Cogen continues. "And because nobody understands it, there's this opportunity to abuse the system."

Well, before your eyes glaze over, give this one some thought: Council is scheduled to vote this Wednesday, March 11, on a controversial proposal to use at least $15m in urban renewal money to bring Major League Soccer to Portland.

"My beef isn't with major league soccer," says state representative Nick Kahl. "I like soccer. What I have an issue with is the city of Portland continuing to use urban renewal as a cash cow to fund pet projects. This is quite literally taking money that funds social services in Multnomah County, and school days, and uses that money to build a soccer stadium for a multi-billionaire."

For example: Multnomah County provides mental health care for homeless people. Cogen and Kahl are saying that if you'd rather spend money on Major League Soccer than ensuring those people stay safe, then your priorities are out of line with theirs.

"Urban renewal also takes money from schools," Cogen continues. "I get that there have been some good things done with urban renewal, but there are tradeoffs involved, and it's because the city has the power to make these decisions without the permission of the county or schools, that it gets away with these things."

"Urban renewal is supposed to be a tool for turning blighted neighborhoods into viable ones," says Cogen. "But if you look at PGE Park, it's between the Mac club and the sparkling new Civic condos. Urban renewal becomes meaningless if you use it everywhere."

Indeed, the state law is very clear on what areas qualify for urban renewal:

"'Blighted areas' means areas that, by reason of deterioration, faulty planning, inadequate or improper facilities, deleterious land use or the existence of unsafe structures, or any combination of these factors, are detrimental to the safety, health or welfare of the community."

PGE Park, "blighted?" Not so much...especially when you remember that city council already renovated the stadium just after the Millenium. Cogen says the idea "makes a mockery" of the urban renewal process. But I asked Peter Englander from the Portland Development Commission about using urban renewal funds for a project like this, and he said "It's for council to make the decisions, it's for us to provide the right information to them so that they can make the decisions, and then implement the decisions." In other words, he's not going to object if Randy Leonard and Sam Adams decide they want to use urban renewal money to build a fancy new soccer park.

Never mind. Newly-elected state representative Kahl is ready to do enough objecting for all of us. He's proposing House Bill 2616, which would mean urban renewal money could be used to fund social services projects, as well as fancy new buildings.

"There's this thought that people who live in East Portland envy the programs that Portland has the opportunity to create," says Kahl, who represents Gresham, Fairview, Wood Village and Troutdale in Salem. "But it's not envy. We have resentment that Portland can use urban renewal dollars to create a utopian community that is only accessible to the richest."

"The great hypocrisy is that this stadium is being paid for by stealing money from the neediest," says Kahl. "My level of frustration with this is unbelievably high."

I say council is "scheduled" to vote on the deal on Wednesday, because it remains to be seen whether the various parties to the deal can stop squabbling in the press long enough to come to a mutually acceptable agreement. Still...the smart money is on the vote going ahead. At the moment, Mayor Sam Adams and City Commissioner Randy Leonard are expected to vote "yes." Amanda Fritz is expected to vote "no." But Dan Saltzman and Nick Fish, either of whom could swing the vote, are still undecided...Here's Commissioner Saltzman's inbox, Friday morning, thanks to an aggressive email campaign launched by progressive group Onward Oregon: 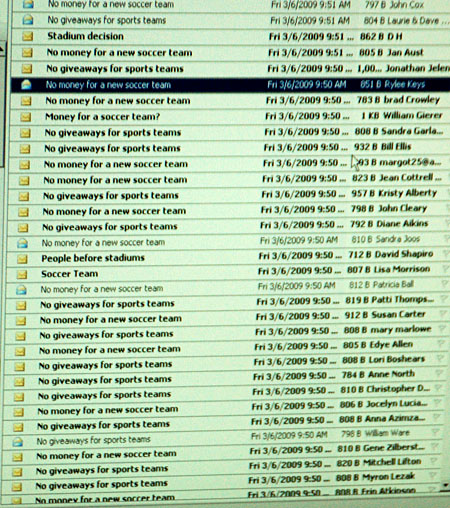 So: While the deal's backers and the Timbers Army might have themselves convinced this will be the best boon for Portland since...since the mid 1970s...there are others who are convinced it's the fiscal equivalent of robbing the poor to feed the rich. A reverse Robin Hood, no less.