City Council has voted 3-2 in favor of major league soccer, with Nick Fish, surprisingly, voting "no," but losing anyway. 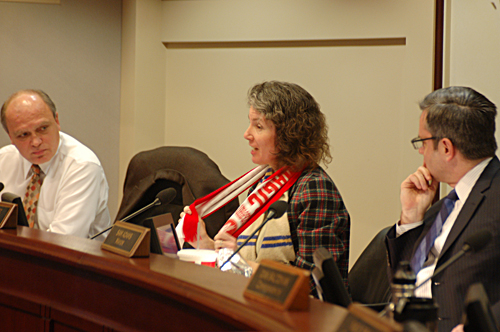 "I think I've probably watched more professional soccer games than anyone on this council, but I'm not making my decision today based on whether soccer is a wonderful game or not," said Fritz. "I'm being asked to vote on the dedication of millions of dollars of taxpayers' money. This increased debt capacity would take money away from those neighborhoods," she said. "We're in really bad shape as a city and we spent yesterday, our whole day in heart-breaking reviews of our city budgets."

Fritz said she "questioned the economics" of the proposal, and voted against it. But she was not alone in her opposition.

"If this succeeds I'll be the first one to buy season tickets," said Nick Fish. "I think this may very well be the best deal we can get for the city." But...

"I've decided that major league soccer is not the right priority for today," said Fish, who said he thought the priorities for Portland were looking after veterans and the homeless. "I believe there is an insufficient connection between these values and betting the farm on major league soccer.

"Before we even cast a vote here this afternoon the Oregonian said a no vote would move the city in the direction of nowheresville," said Fish. "To me the test of whether Portland is a major league city or not, is..." nothing to do with Major League Soccer.

"Respectfully, I vote no."

City Commissioner Dan Saltzman voted yes, however, conditional on no urban renewal money being used from a yet-to-be created district around PGE park, without including the county and the school board in the decision. Saltzman proposed an amendment to pull the $15m of urban renewal money off the table, which was seconded by Amanda Fritz. Commissioner Leonard agreed to vote for the amendment because he wants to have a "broader discussion about urban renewal," in the future, he said, adding, "but I'm a political realist."

Saltzman got a huge cheer in council chambers when he voted yes.

"It means that we need to come up with the $15m, one way or another, in the timeline stated," said Adams, who voted yes along with Randy Leonard.

Nick Fish's "no" vote is completely surprising to this reporter. Politically, he had little to gain from breaking with Leonard and Mayor Sam Adams over the proposal, and ending up on the losing side of a 3-2 vote. When he voted "no," he says he didn't know which way Saltzman was going to vote—"Dan keeps his cards pretty close to his chest," he said.

"I cast a tough vote on a tough issue," said Fish. "I'm an independent person. I made up my mind, and voted the way I did because I thought it was the right thing to do."

"To me it's not so much about breaking," said Fish. "I think we get too hung up on these things. I called it the way I see it."

"I'm positive about the outcome of everything, but yes, I was surprised by Nick's vote," said Merritt Paulson, when I caught him on the stairs, afterwards. He also said, "are you going to write something else overwhelmingly positive about me on your blog?" but I think he was kidding.

"These are five very independent people and their support will be different depending on the issue," said Adams, when I asked him about Fish's vote. "I'm pleased that this is the end of the beginning and we can get on with the difficult work that lies ahead. This is a challenging deal, but I think it's achievable."