Randy Leonard may well get what he wants this afternoon when council votes on Major League soccer, but he won't have done so without having his nose bloodied by County Chair Ted Wheeler. 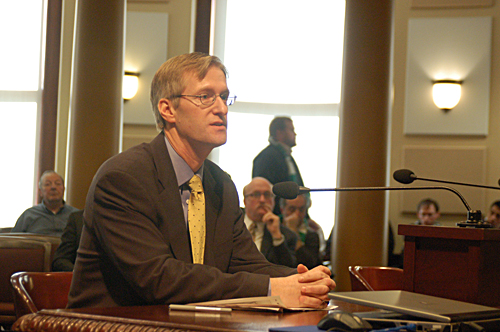 WHEELER: Council tried to calm him down, but the man kept hammering at Randy Leonard for a good ten minutes...

It's fair to say that Wheeler, who is normally reserved in public, really laid into Randy Leonard this afternoon over Leonard's plan to use $15m in urban renewal money to fund the soccer deal—25% of which would come from diverted tax revenues that would otherwise fund social services and schools in Multnomah County. Wheeler is facing a $45m budget hole, plus a likely $20m in state funding gaps. The school board is facing a $14m hole in its general fund this year, too.

"You started this hearing by saying that we were picking a fight," Wheeler said to Leonard. "But I'd suggest that rather than hashing out a deal on a Monday that we hear about 20 minutes before you vote on it, that we should be deciding on these issues mutually."

Wheeler suggested that the county should have been at the table earlier in the discussions.

"I'm not sitting here with my hand out," Wheeler continued. "I'm saying we should be working on prioritization mutually. I've heard lawyers, consultants and planners all say that there's no risk associated with this deal, now, I'm new in the job but I wasn't born yesterday. I'd like to have my lawyers, my consultants, and my planners look at the deal."

"We're here at the table too late," said Wheeler. "Now we're at the table, having this discussion, but we should have been here all along."

Leonard was clearly frustrated by Wheeler's attitude. He called Wheeler's rhetoric "irresponsible" and "disingenuous," reminding Wheeler of all the times the city council has helped the county financially over the years. "We've proven ourselves to be a reliable partner to the county, we've always stood up," said Leonard.

"I've been reading in the newspaper this morning that kids aren't going to get health care because of this deal," Leonard said. "It just doesn't feel like we're having a real discussion."

"We're not," shot back Wheeler, before leaving the council chamber, with his zinger resounding around the chamber.

Leonard looked both shocked and more frustrated than this reporter has ever seen him in a city council session.

"This reminds me of one of my favorite sports metaphors, which is that I went to the fights and a hockey game broke out," said Nick Fish.

Meanwhile so far, neither Fish nor Dan Saltzman has said anything that could lead us to believe they'll vote no on the deal. Still, the TV stations are pleased: They've got their tape for the afternoon broadcast.