A bill aimed at expanding and modernizing voter registration by allowing Oregonians to register to vote online passed 45-9 in the House this morning. Portland representatives Ben Cannon and Jefferson Smith are the sponsors of the Bill, HB 2386, which backers say will have a major impact on young people voting.

"This is going to be huge for young people," says Henry Kraemer, political coordinator for the Oregon Bus Project, which has pushed the bill since the beginning of the legislative session. "We live most of our lives online, we should be able to do our civic duty online." At 21, Kraemer is the state's youngest lobbyist and helped pack the bill's February hearings with young people. When on one occasion Secretary of State Kate Brown asked everyone in the hearing room under 30 to raise their hand, says Kraemer, three quarters of the room lifted an arm.

If the Senate approves the bill (hearings are slated to begin next week) Oregon will join Arizona, Washington, California and Utah as states that have voted to institute online registration. When Washington began online voter registration in January 2008, almost 40 percent of new voters registered online. In the first six months, half of the new registrants were under the age of 30.

Personally, I think this helps fix one of the problems with vote by mail — since young people tend to move around a lot, they can sometimes wind up ballotless on election day. During the past election season, four ballots showed up in my mailbox for people who moved out months and years ago. Online registration should hopefully allow people to change their address quickly and easily. 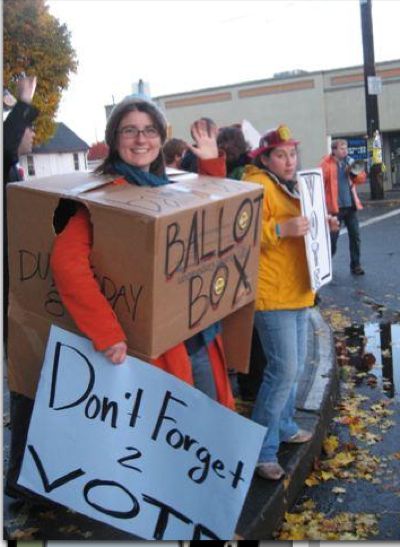 The youths love that voting (that's HB 2386 sponsor Rep. Jefferson Smith with the megaphone).
If you enjoy articles like this, please help the Mercury continue our mission of providing up-to-the-minute information, progressive journalism, and fun things to do in Portland by making a small recurring monthly contribution. Never forget: Your help is essential and very much appreciated!
CONTRIBUTE NOW