McMenamins has replaced the Tracey Sparling ghost bike outside the Crystal Ballroom, according to Crystal box office staffer Tony Cameron—who called the Mercury yesterday to blow the whistle on the absence of the bike. 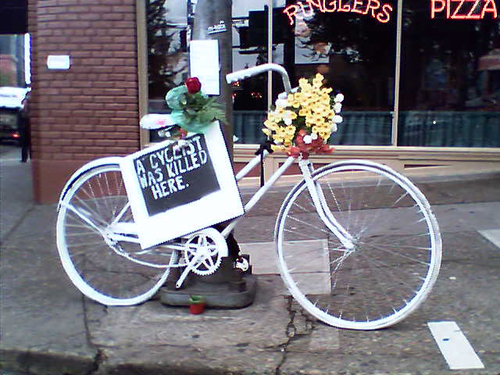 "I think they put it back up after the Mercury put up its story," says Cameron. "And as far as I'm concerned, as long as they let the bike stay there, then all is forgiven."

"Until the mother stops visiting, we should respect the family," Cameron continues. "I don't think McMenamins wanted to be seen in that kind of negative light."

"Actually my husband drove down there last night and asked why they did this and what was going on," says Sparling's aunt, Susan Kubota.

"That's great," says Kubota's husband, Jim Lindblad. "I ran in there last night on my drive back from OHSU, and the people in there were really apologetic, and apparently uniformly unhappy about it being taken down."

"The property manager called me later last night," says Lindblad. "Apparently the issue was that people had been placing things around the bike that they had been cleaning up. But they realized their mistake, he was really apologetic and unhappy about it, and apologized for not thinking it through or talking to us first."

"They wanted to make it right," says Lindblad. "I'm happy they've put it back up. I think it's really great that they've done that, and I pointed them to [the Mercury's] story last night. It's kind of them."