The quaint storefront at 824 SW 1st Avenue is reportedly re-opening as an adult swingers club. Yep, you read that correctly, Downtown Portland is about to get a new palace to polyamory.

Wait, it gets even better. Well-placed gossip also has it that club is affiliated with Ron Jeremy, an adult film star who, according to Wikipedia, also answers to the name "Hedgehog." Whether the porn star Jeremy is affiliated with the investment group backing the venture or has simply sold naming rights has not been confirmed. What's certain is that the nearby Hotel Fifty, a recently rehabbed mid-century modern hotel one block north, is going to see a big rise in business.
The building is owned by John Beardsley, who also owns the building containing Bikini Coffee on SW 5th, not to mention the building housing the city's emergency women's shelter on NW 5th. 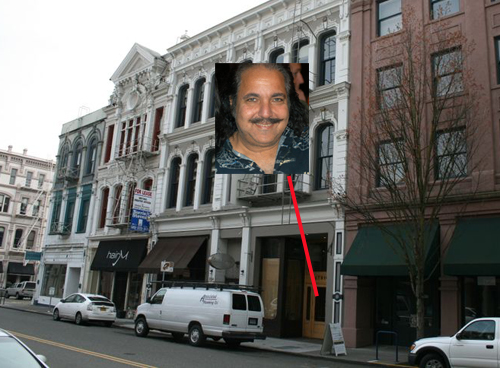 "I leased the property to Pine Street Properties," says Beardsley. "You'll have to discuss any arrangements with them."

Beardsley didn't have a number for Pine Street Properties, so we did some Googling and searching on the Secretary of State's website, and there are three such companies, but with no phone numbers attached. We'll do some digging and get back to you.

Beardsley wouldn't confirm or deny the rumors, but the Mercury has good reason to believe they're true. The building is across the street from a 24hr Bally's gym—which has a gigantic window in the front where folks on their exercise bikes will be able to watch as the swingers come and go. No word yet on the opening date, but we'll let you know as soon as we do.

I've got an email in to the Portland Business Alliance, seeking their opinion on the deal. And the mayor's office, too, because they're all about supporting small business.