Metro Buys Fen. Fen is Not Bog. Or Stadium.

As the hardest-working British journalist in Portland you are probably the only one who knows what a fen is. I imagine when you are not on the phone talking with your cronies (sorry, “mates”) about soccer (sorry, “football”) and how the team names over here sound like candy bars, you are probably sending them cable grams discussing your most recent analysis of E.M. Forster’s work or how the peat in Oregon is not the same as in Wales.


In other words, you are probably the only practicing journalist in this town who knows the difference between a fen and a bog.

A fen is a type of freshwater peat wetland. Fens and bogs are similar because they both develop by the accumulation of peat. Peat accumulates because the waterlogged soil in these wetlands lacks oxygen, creating an environment that is not favorable for most decomposing bacteria. The anaerobic bacteria that can survive are very slow at decomposing the organic material found in the soil. Over time, the organic material builds up, forming peat. Back to Bragdon.

That is why of a Sunday morning I am willing to give you this scoop. You have earned it.

We bought a fen.

There you have it. The scoop. We bought a fen. It’s 13 acres. The rest of the media will learn this fact only on Monday or Tuesday, and they won’t know what to do with it. Being so fixated on stadia, they may think we bought Fenway Park, which as you would probably not know is a baseball stadium in Boston where the Red Sox play. The Red Sox are a baseball team, not to be confused with Rex, who is a Metro Councilor. So Boston has Fenway Park, we have Peach Cove Fen. Here is a picture suitable for framing. 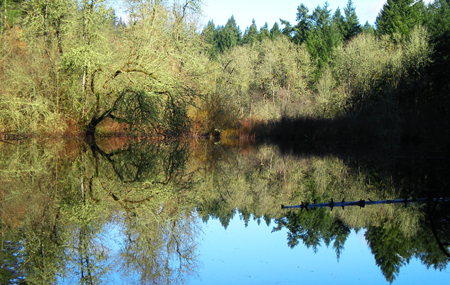 Here’s another part of the scoop: the fen, and the rocky area it is part of, was formed by floods which happened tens of thousands of years ago, called the Bretz (or Missoula) floods, when the ice dams to the east of here broke and the large inland sea which covered what is now much of Idaho and Montana came rushing down here. (Idaho and Montana are now states in our union, and in Idaho bicyclists can go through stop signs.) Since these floods happened a long time ago, any journalist who covered them is now dead, so you could probably write about them again as if you were doing it for the first time, and nobody would know the difference.

Your source of all good news
David L. Bragdon

Thanks for the heads-up, and the borderline journalistic insult, David. Still, as long as nobody calls me a "civic bully" in their editorial today, I'll probably be able to look on the bright side.
If you enjoy articles like this, please help the Mercury continue our mission of providing up-to-the-minute information, progressive journalism, and fun things to do in Portland by making a small recurring monthly contribution. Never forget: Your help is essential and very much appreciated!
CONTRIBUTE NOW