Now that City Commissioner Randy Leonard is meeting with University of Oregon staff tomorrow to discuss an amicable solution to the Made In Oregon sign argument, how about this: A competition for Portlanders to design the best new sign. Since this issue has clearly captured the public imagination, and we're always being told that Portland is a "creative capital," why not put some of that creative capital to the test? Choose local! Sustainability! Organic marijuana! Blerrghhh! Et cetera.

So...I stopped in to Leonard's office this afternoon to ask him how he was dealing with accusations from his fellow commissioner, Dan Saltzman, that he had "bullied" the public process on this issue. "I think I choose my words carefully and as strongly as I argue on any position, I try not to attack people personally," he said. "I work hard to listen to people, here, and I've done that with Dan in the past—I was just pretty taken aback."

But as I was writing all that down, I got distracted by a couple of designs on the table in Leonard's office. Mostly, they featured the sign with the words "Portland, Oregon," and then the University of Oregon's "O" symbol emblazoned on the water tower just behind the sign. They were meh. As in: I think you could do better.

Would-be designers should incorporate elements of the University of Oregon's identity and the identity of Portland into the sign, and those designs could be judged by a panel including, let's say, Leonard, the University of Oregon Vice President Dave Frohnmayer, and maybe a representative of the historic landmarks commission, just to give a semblance of due process. Or better still: Why not have an exhibition of the best ten designs at city hall, and a public vote?! 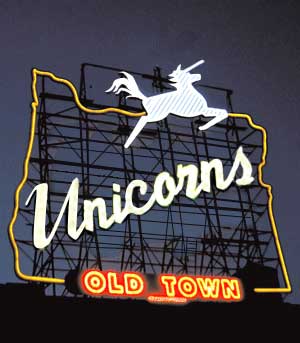 I don't expect this idea to get off the ground. It's too good. But if you want to just email me your ideas, for the time being, I'm sure we can find room for them here on Blogtown. And maybe one day, in the future, Merritt Paulson will sponsor a huge outdoor show of 50 different Made In Oregon signs, on the roof of his big new stadium, and the city can call it a biennial art exhibition, and visitors will come from all over the world, and Portland will be relevant on the world stage, once again...and the New York Times will be nice to us, and you won't have to tell your friends from England on the phone that you live "near Seattle" before they know exactly where it is that you mean. That's right...

I have a dream, today!