People working on bicycle policy issues in Salem received a shock on Friday when they tried to call or email Karl Rohde, the well-known lobbyist for the Bicycle Transportation Alliance. That afternoon, Rohde's email auto-reply informed all interested parties that Rohde no longer works for the BTA.

Rohde's firing from the BTA is surprising not just for its suddenness, but because the BTA is the primary bicycle advocacy group working in Salem. The departure of its only lobbyist right in the middle of the legislative session throws a wrench into several bike campaigns.

Rohde was working on four main issues, all of which are facing a tough fight in the legislature: the Idaho Stop Law, vehicular homicide, driver education and bike funding. 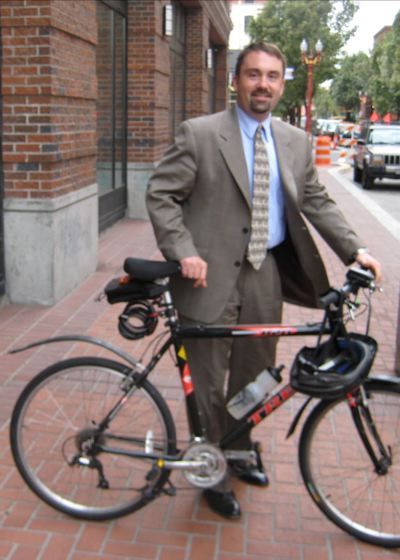 BTA executive director Scott Bricker refused to comment on the reason for Rohde's firing, saying "no comment" even on whether the decision to let Rohde go stems from budgeting reasons or personality problems. BTA staff were informed that they would meet Monday or Tuesday to discuss the sudden staff change. Until then, speculation abounds about the reason for Rohde's firing. The Oregonian reports that an anonymous source within the BTA says Rohde was dismissed "largely because the head of the association's legislative committee was unhappy with the way in which he was pushing its agenda in Salem."

Bricker says he will start working in Salem to continue Rohde's work. Bricker was the BTA's lobbyist for several years until Rohde was hired in July 2007. Additionally, the BTA has hired a political consulting firm to cover the hole left by Rohde's departure.