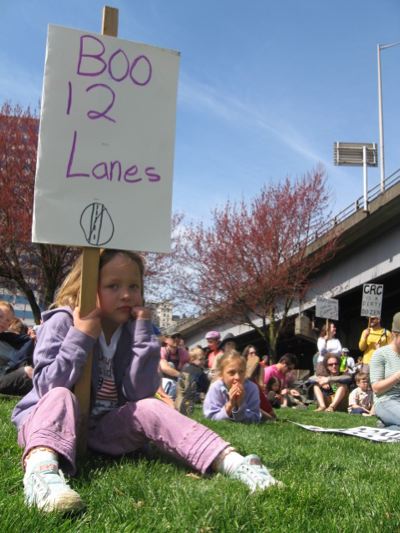 The weather was definitely working in favor of the people opposing the 12-lane Columbia River Crossing bridge. An estimated 400 people turned out to the noon waterfront "Opportunities and Alternatives" rally against the planned bridge. But hundreds more wandered past taking in the protest signs along with the sunshine and enjoying the greenery on what was once Harbor Drive pavement. Partner progressive groups 1000 Friends of Oregon, the Bicycle Transportation Alliance and Coalition for a Livable Future (CLF) ran out of their 350 petitioning postcards in about 30 minutes.

Two hours before the rally began, Mayor Sam Adams reiterated via his blog that with proper oversight, the 12-lane bridge would be in line with Oregon's green climate goals. Jill Fuglister, co-director of CLF, wasn't convinced. "Why not keep the bridge lean and have an oversight committee?" Fuglister asked while mingling before the rally officially started. Just then, Fuglister's adorable towheaded daughter (seen above with "BOO" sign) tugged on her shirt.
"What's that sign?" her daughter asked, pointing.
"I don't know, why don't you read it outloud?" Fuglister replied.
"Four two zero zero zero zero zero zero zero zero," the little girl replied. That is the projected cost of the 12 lane bridge and, as Fuglister and others pointed out, no one has any idea where that bulk of that budget could come from.

A month ago, local consultant Joe Cortright filed a public records request with the CRC project committee demanding all their reports or analyses related to financing the bridge. The committee said they had nothing on the topic. "That either means they're lying or they have not done any serious homework," says Cortright. "They're pushing this $4.2 billion project without having found the money anywhere. Politicians' discussion over whether this should be 10 lanes or 12 lanes sounds like a couple of middle school boys arguing over what color Lamborghini they want. They're very opinionated but they don't have the money to afford any of them."

Transportation activist Chris Smith laughed at the analogy. Smith says that the Oregon Department of Transportation boxed in local politicians by only doing a complete environmental impact statement on the bridge's 12-lane option and outright lied in its land use report that said the big bridge would have no impact on Clark County's growth. 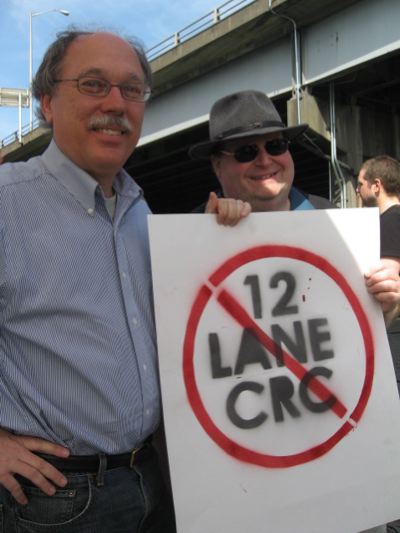 While the rally featured a good handful of elected officials — including two OR state legislators, one WA state senator, Metro Councilor Robert Liberty and City Commisioner Amanda Fritz — the opinion was strong that local politicians had disappointed their constituents in supporting the 12-lane bridge. 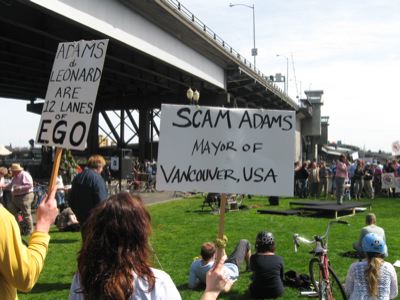 More photos — plus Commissioner Fritz on whether she felt "boxed in" — all below the cut.

Amanda Fritz was the lone vote against the 12-lane bridge when it came before City Council in late February. Holding up a copy of the Locally Preferred Alternative for the bridge that voters approved last summer, Fritz explained that the process was rushed. Fritz's paper was covered in yellow highlighter — she noted 31 items on the list that weren't addressed before council voted on the project. Particularly irksome was that voters supported building "the smallest bridge possible."

"It's inconceivable to me that the biggest bridge on the table was the 'smallest bridge possible.' There was no discussion over other options," says Fritz.

When people argue now that the bridge is a done deal despite Fritz's vote, she says, "We thought the Mount Hood Freeway was a done deal." The Mt. Hood Freeway would have torn a line through SE Portland to provide a faster suburban commute, but citizen opposition turned the tide against the project. 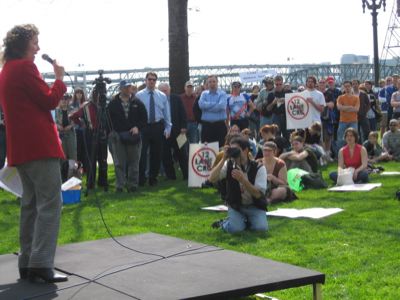 The rally gave voice to a lot of different opinions. Everyone turned up from Vancouverites who oppose 12-lanes in part because they fear light rail will be a "crime train" to Recall Sam Adams Jasun Wurster (who ran the sound for the rally) to this old t-shirt printing guy who sold incomprehensible t-shirts: 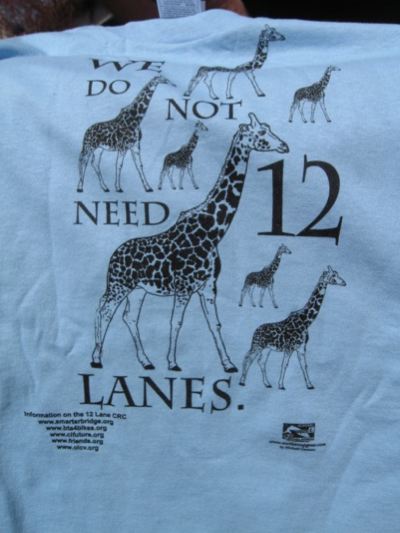 Also present was Senator Don Benton, Vancouver's hard line Republican rep in the Washington state senate, took the stage to criticize both the bridge's cost and basic plan. "If it only meet three lanes on each side of the river, how's that going to solve any traffic problems?" 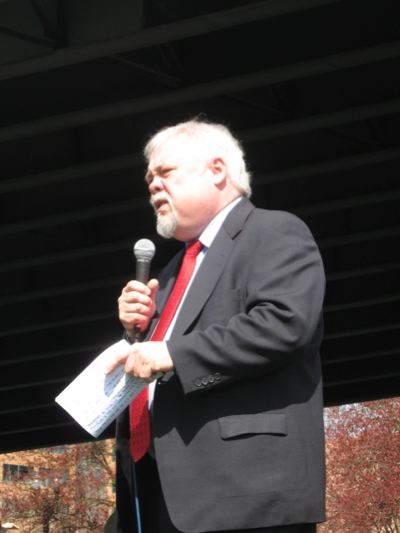 Representative Nick Kahl (D-East Portland) also spoke out against two basic problems with the bridge idea. "No matter how big the bridge is, there will still be congestion," says Kahl. "For me, the size of the bridge is the problem. I'm concerned about subsidizing sprawl in Vancouver." He encouraged people to tell their representatives to refuse to vote any money for the bridge. The state is currently putting $30 million a year toward planning the bridge.

And one of my favorite Representatives, Jefferson Smith (D-East Portland) led the crowd in a cheeky-call and-response: "What do we want?!" "A supplemental environmental impact statement!" "When do we want it?!" "In a matter of months!"