Lauderdale on Adams: "He doesn't listen."

"I think it's a dog and pony show," he said. "This public process is a sham, because it's clear that he's already made his decision and nothing can sway him. Between this, the I-5 bridge, it feels like he's lost his stated principles from before the election."

"He's already decided," Lauderdale continued. "This process is fraudulent, and he is really alienating me. I was the person who stood up and supported that press conference, and you know what, I'm just appalled."

We reported on Lauderdale's opposition earlier today, with a link to the post-scandal press conference in support of Adams, if you're interested.

"Right now, people are unfortunately scared to oppose the mayor, because they might want something from him, still," said Lauderdale. "They're scared that he'll stay in power and that he'll punish them. At this point, I'm not scared of being punished because he has no way to punish me. It's an unbelievable turn of events." 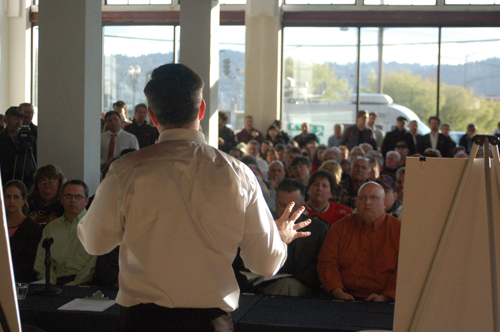 ADAMS: Presenting his idea before taking "feedback" from the audience earlier...

"The Memorial Coliseum is one of the few buildings in this city that makes this city great," Lauderdale said. "It could be used for any number of purposes, any number of things. It feels like he's desperate to prove that he can pull things off."

"He's promised the veterans a better building, but they're not going to get one, because the City of Portland doesn't have a great track record in terms of building public spaces," he continued. "Look at the Rose Garden. The new structure will absolutely not be as beautiful as this one."

"My band is playing a show in the Coliseum in September to celebrate Oregon's sesquicentennial, and I will absolutely place myself in that building before it is torn down, and I will chain myself to it," said Lauderdale. "Where are the veterans he has supposedly been talking to about this? He says he has worked really hard to talk with the veterans but I don't see them."

Five minutes after we talked, Lauderdale re-approached me. "I keep thinking that somehow he's going to come around and that all of my inflammatory statements will somehow stop that from happening," he said. "But after experiencing him for the last couple of months, he doesn't listen."

Others are more optimistic. Portland architecture blogger Brian Libby, who interviewed Lauderdale earlier, says: "I think he's listening, because he's only now starting to get the importance of the Coliseum. I respect that he wants to get a deal done, and he's trying to make things happen, and that he's hearing from all kinds of constituents. But Mayor Adams could be a hero if he were to save the Coliseum and figure out a way to get a baseball stadium worked out, too."