27 people signed up to talk about the plan to demolish Memorial Coliseum this morning. Not a single one of them has spoken in support of the idea so far... 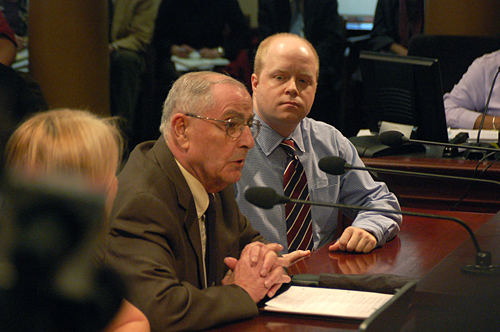 Former Oregon Governor Victor Atiyeh said the discussion about knocking down Memorial Coliseum has been "very cavalier." He urged council to be more specific about how much the Rose Quarter redevelopment might cost, and to nail down an alternative proposal for memorializing veterans, before proceeding.

Portland Architecture blogger Brian Libby urged council to preserve the Coliseum as a "jewel" of modern architecture. And he said he was "troubled" by calling any new development "sustainable." "Demolishing a building is contrary to the very spirit of sustainability," he said.

"How can the city decide in a period of weeks after private discussions with only two companies owned by wealthy families who each advance their own interests to demolish a public monument of more than 50 years?" asked Will Macht, a PSU urban planning professor. "What sense of public priorities and public interest does this action reveal, and how can any member of the public support any commissioner who votes for it?"

Kristen Minor from Peter Meijer Architects referred to Merritt Paulson's "stunning admission" in this morning's Oregonian that demolishing the Coliseum would allow the city to take advantage of existing parking in the Rose Quarter. She asked: "Our leadership values parking garages more than our glass palace?"

"I did not get a feeling of acknowledgment in yesterday evening's meeting that it is a significant building," said Thomas Phillipson, a PR and marketing manager from the Portland Art Museum, who encouraged council to take preservationists' concerns seriously. "It feels now that demolishing the Memorial Coliseum is a fait accompli, but I think there are other options."

"Is Portland a city that's destroying itself?" asked PCC student and former track athlete Samuel Lumsey. "I don't like to talk about greed, but who is this stadium for? Is this something that the public wants, or that Merritt Paulson wants? Is this something that we're doing for our society, for our community, or for the business interests?"

"I don't care whether it's a soccer stadium or not," said Henry Kane, a world war two veteran. "I care about keeping the faith, because some of those people listed on the memorial are some of my buddies. A corporation, particularly from Delaware, is not a reliable entity to build this project."

"Portland is a city that prides itself on excellent planning, public process and sustainability, " said developer Douglas Obletz. "This plan is not a Portland plan. The drawings I saw last night are not ready for prime time, and they're not ready for a $50million to $200million investment. Rome wasn't built in a day, and Portland wasn't planned in a week. I don't believe it's possible to make a 50-year decision on the future of the city based on two days of design charettes and one night of meaningful public input."

"Given what I heard last night and how the blogosphere lit up afterwards, I think the council may be surprised at how the public might wish to be involved in shaping the future of the Rose Quarter," Obletz said.

"We are asking that you slow down and in fact craft a process," said Angela Kremer from the Eliot neighborhood association. "This idea has had no neighborhood involvement in any way."

Adams' resolutions will move to next week's agenda for a second reading. In the meantime, council discussion was limited following the public testimony. Adams said "I really appreciate the testimony."

Then Nick Fish made a "joke."

"I agree that this is a difficult issue," he said. But he took Commissioner Randy Leonard to task for attacking the Memorial Coliseum as being a "50 year old building" in the Oregonian.

"I happen to be 50 years old. My plumbing does not work. My heating and ventilating system needs to be replaced. And anybody who sees me bend over knows that my roof needs a little work," said Fish. "There are people in my life who have told me that I am in a sad state of disrepair, but I think we can debate this at a higher plane, and I actually think I'm in the prime of my life."