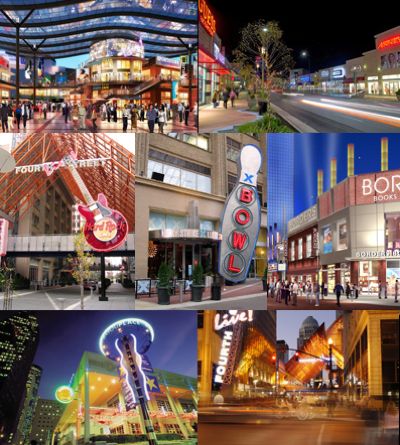 Bam! A Cordish "Live Block" is coming to Portland!
Collage via Portland Spaces

Well it's not just their designs that have been bad in other cities - we blogged yesterday about complaints that Cordish strongarmed public officials in both Kansas City and Louisville. Now get this: in Kansas City's Power and Light District (the Cordish project Portland's Rose Quarter Live! is supposed to most resemble) the company got in hot water for instituting a dress code that was "hysterically racist" according to citizen complaints.

The dress code for the bars-theaters-restaurants district banned white t-shirts, baggy pants, men wearing necklaces and shorts that hung below the top of one's calf. Many Kansas City citizens and a majority of City Council members felt the ban on very specific clothing items clearly discriminated against black people.

The ACLU got involved and after a heated City Council meeting (which involved a former city councilwoman shouting at the African-American Cordish rep, "You want to invite us down to picket you? I'm embarrassed black people stand up here and advocate discrimination!") the city banned restrictive dress codes in developments that receive taxpayer assistance.

Portland has not yet signed any deal with Cordish, but the redevelopment plan is moving swiftly forward. A study (pdf) commissioned by the City of Toronto found that municipalities partnering with Cordish to create a Live! style project fund 30 percent of the development with public money, on average.