City Commissioner Randy Leonard has been pushing his plan to site a huge neon rose atop the Oregon Visitors' center in Waterfront Park this morning, in advance of a discussion over the demolition of Memorial Coliseum.

Portland architecture blogger Brian Libby was clearly dumbfounded by the presentation. "This is insane," he said. 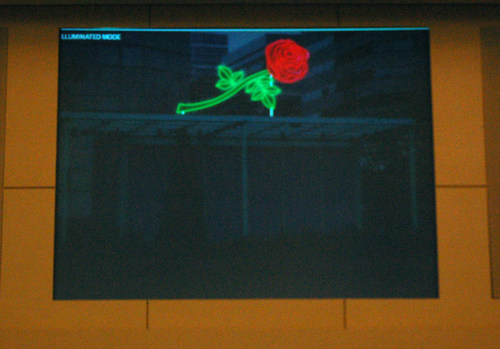 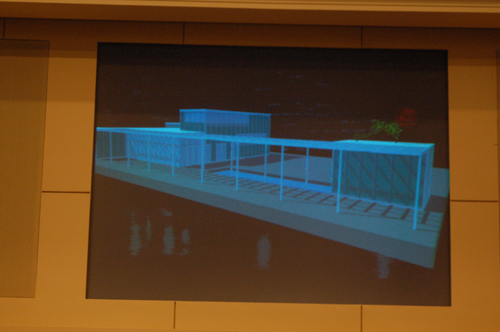 A WORK OF MODERNIST ARCHITECTURE: WORTH SAVING, SAYS LEONARD...

"Is the sign going to be iconic or ironic?" asked architect Rick Potestio.

"Although I'm here to talk about the Rose Quarter issue, I wanted to reiterate what these gentlemen are saying. It's wonderful that Commissioner Leonard has moved to restore the building," said Libby. "But with all due respect when I heard that there was going to be a neon rose on top of the building, I thought we might as well put 'Eat at Joe's' on it."

"And in my heart of hearts I believe that John Yeon would be rolling in his grave if he knew that a neon sign was going to be placed on the building," Libby continued. "I just feel like it's very crass."

"I understand the resistance but I don't think it's fair to characterize this as a hamburger sign or as something that belongs in Estacada," said Leonard. "I think this will be an iconic image."

Leonard has been talking about plans to have the rose blink during the rose festival, too. Several people in the audience have been shaking their heads and whispering, in response.

There have also been concerns about the cost of allowing the Rose Festival to occupy the building for a low lease. City Commissioner Dan Saltzman asked whether the budget has even been worked out. "We don't have a budget, yet," Leonard admitted. Saltzman said he was concerned that the deal, which is being done through Leonard's water bureau, might lead to water rate increases.

"This is not going to impact rate increases," said Leonard. "Well, you're telling me that, but I'm not seeing the details of the lease," said Saltzman. "I don't know how many times I can tell you that, and if you don't believe me, I don't know what to do," Leonard said. "Well it sounds like you've got all the details of the lease worked out," said Saltzman. "Nobody is trying to hide anything from you," said Leonard.

Hear in Portland: Karma Rivera and Veana Baby Girl Power a Free Show, And—Oh Shit!—Kendrick Lamar Tickets Are about to Drop for Summer!