UPDATE, 2:46pm: Commissioner Leonard says the renovation of the Visitor Center, on top of which the rose will sit, is a case of "no good deed going unpunished." "I gave a dog mouth-to-mouth once," he adds. "And then it turned around and bit me." Wha? 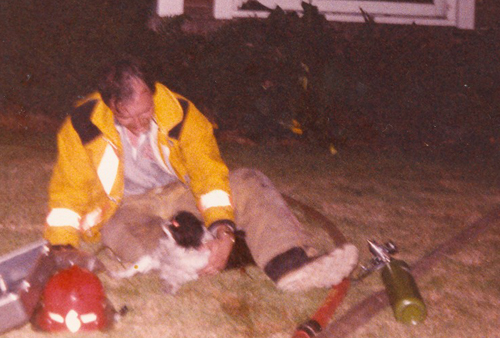 RANDY LEONARD, CIRCA 1982: "YOU HOLD ITS LITTLE SNOUT CLOSED AND THEN BLOW IN THE NOSTRILS AND MOUTH," SAYS LEONARD...

The commissioner says when he was first contacted by Randy Gragg and Thomas Lauderdale, he was keen to help with the renovation. But the argument over the sign has caused him plenty of grief. "We've been through various iterations of the design of the rose, and now we've ended up with a 1948 version of the rose," he says. "But the folks designing the rose have asked that their names be kept out of things because they don't want to face the derision that I am now facing."

Leonard stressed that the "resuscitation du chien mechant" metaphor is not just appropriate in this context, but for much of life as a whole. Depressing!

ORIGINAL POST, 11:19am: City Commissioner Amanda Fritz told council she is "beyond troubled" this morning by Commissioner Randy Leonard's circumvention of the historic landmarks commission process to plant a 10ft neon rose sign atop the old McCall's Restaurant in Waterfront Park.

The historic landmarks commission is supposed to regulate sign code in Portland, but has lately been circumvented by council over the Made In Oregon sign debate, and now, once again.

Leonard's idea passed by a 4 to 1 vote this morning, and a rose-illumination ceremony is planned for the building with fireworks at dusk on May 22. Leonard's favorite blues musician, Curtis Salgado, will also be playing. Wait. Try to conceal your joy.

Leonard said the building had previously been vacant for three years and that previous tenants had left a "trail of destruction that is nearly irreparable." He appreciated concerns about the rose but said he wanted to create a "recognizable rallying point" for the Rose Festival.

Fritz, meanwhile, said she appreciated Leonard's commitment to renovating the building and to providing offices for the Rose Festival, but that she was disappointed that her fellow commissioners had not taken up her amendment last week to split the idea in half: One half to give the building to the Rose Festival, the other half to refer the neon rose sign to the historic landmarks commission, which has traditionally ruled on sign issues.

"I'm troubled, beyond troubled, that we're waiving the public process required for all businesses downtown," said Fritz. "I value the voice of our citizen commissions, and this devalues their purpose, and our respect for their work. The citizens of Portland spent months working on the historic landmarks guidelines to determine what we value in signs, and we are weakening our ability to defend our sign code by making an exception for this."

Fritz said the rose sign could be put on a pedestal instead, "you could not have it twinkle," she said.

Mayor Sam Adams said he was pleased about "re-purposing and restoring a historic jewel" of a building. Notably, That's the same rhetoric he's been using since Monday about the Memorial Coliseum.

"I think that the idea of a new sign is completely appropriate," says Portland Spaces editor Randy Gragg. "Any time a building gets a new user they should be able to advertise. But I'm curious why anyone would volunteer to be on the landmarks commission when they aren't being included in some of the key precedent-setting discussions."

Commissioner Dan Saltzman said he could vote for the idea on the condition that water bureau repair dollars would only be used in the basic renovations, and not for any future building repairs without going through the city's budget process. "While I still have reservations about waiving our own sign code I am aware of the importance of this idea to Commissioner Leonard," he concluded.

Biden's Signin': Here's What the Executive Ordered During His First Full Week in Office