I was up before sunrise today to trek down Salem for the biggest bicycle law lobby day of the year, the Oregon Bike Summit.

First lesson learned: there is nothing more hilarious than politicians wearing Spandex. Senator Atkinson (R-Grants Pass) wore his special star-spangled socks to give the opening morning pep talk to the more than 100 cyclists acting as volunteer lobbyists for the day. 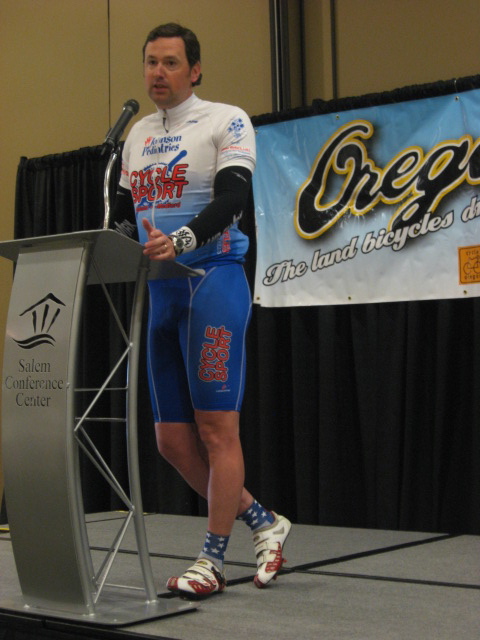 "It used to be 'We won't give money for bikes - they don't pay taxes.' You'll run into some of that on the Capitol still," warned Senator Atkinson. Someone asked why cyclists are painted broadly as a radical minority — Atkinson took a lot of heat on talk radio for supporting the Idaho Stop Law. "I'm a Republican with shaved legs, man, try being me!" responded Atkinson, before hobbling off the stage in his clipless shoes.

The Bicycle Transportation Alliance (BTA) set up camp in the Capitol rotunda, schedules and colored bike pins spread over a black stone bench on the edge of the stately hall. This is the first day in Salem for the BTA's new advocacy assistant Margaux Mennesson, who is part of the 4-person team trying to fill the void left by the BTA's recent firing of its only Salem lobbyist, Karl Rohde. 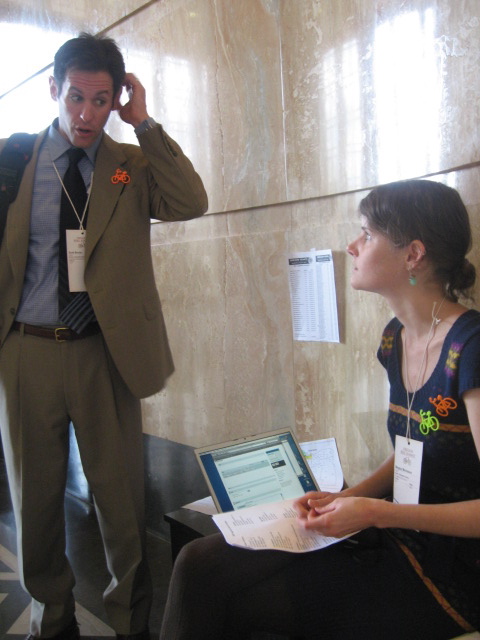 Mennesson's task is large. The BTA has meetings with every senator and representative in the state, cycle advocates are here to convince them to vote for three key bills (R.I.P. Idaho Stop Law): requiring drivers to know current Oregon traffic law, creating harsher punishments for witless drivers who kill cyclists and upping funding for nonmotorized transportation.

It's this last bit — increasing funding for bike and pedestrian projects — that could have the biggest impact on Portlanders. For all we talk about being a bike friendly state, only a measly one percent of the state transportation budget is spent on bike/ped projects (and only .7 percent of Portland's Department of Transportation budget!). The BTA and other bike groups in town want to increase that one percent of the budget to 1.5 percent, which last year would have meant $3 million more dollars to spend on projects like sidewalks, bike lanes and crosswalks. Sounds like an easy sell, right? Uh....

"They'll start talking about bicycles and what a threat they are and 'They didn't stop! I almost ran someone over!'" gripes Oregon bike and pedestrian advisory group member A.J. Zelada. Indeed, in one of the meetings I sat in on this morning, the first thing Portland Senator Margaret Carter's chief of staff said was, "I live in Salem and I don't feel safe biking here. I wouldn't want my kid to be on a bike." He then recalled the gruesome crash of his best friend, who was hit by a car while biking in Portland and had to collect his teeth from the street. "When more bikers bike, there are fewer accidents. We all jump for that outlier threat," responded BTA executive director Scott Bricker. "One of our troubles is the 60 percent of people who don't ride bikes - how can we make you feel safe and then get you on a bike? That 1.5 percent builds infrastructure that makes people feel safer."

More posts from Salem as the lobbying heats up today! And hopefully no more stories about TEETH in the STREET.