PTFC2k9: Back to Back Weekend 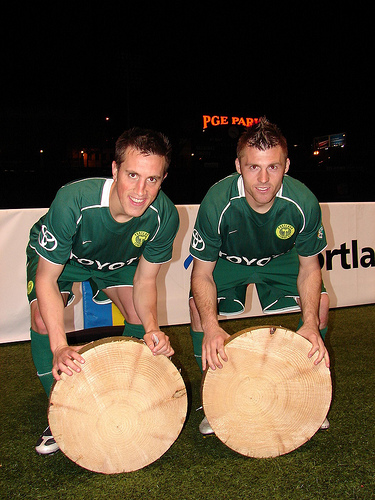 Well howdy folks! This past weekend the Portland Timbers played twice at PGE park against the Carolina Railhawks. Two games in one 'weekend' against the same team isn't ideal, but it allowed the Timbers to experiment a little and get their legs under them. Both games were very exciting, with really encouraging moments and, unfortunately, some clutch your chest and grab for the nitroglycerin moments.

Good news, bad news and thoughts below the fold, though I'm pretty sure the best news is obvious from the picture.

The weekend wasn't without excitement before the games even began: starting goalkeeper Steve Cronin the Barbarian went down with an ankle injury in training on Wednesday and the Timbers front office scrambled to find a goalkeeper. For those paying attention, yes, the Timbers have a young keeper named Brian Visser backing up Cronin, but it seems the coaching staff decided he wasn't ready for prime time this early into the season and his career (he's fresh out of college).

They went out and borrowed Chris Seitz, a U-23 US Men's National team starting keeper who is the backup keeper for Real Salt Lake of the MLS. Seitz got one emergency training session Thursday morning, to meet the team. I can't imagine anyone was confident going into the match, and the first 15 minutes of the first match were harrowing and nearly gave me a damn heart attack. Things got better from there. Thoughts on the matches:

Scary: No one on the team would trust Nishimura or Keel, and it appears for good reason—they couldn't work with the defensive unit at all.

Awesome: Gavin Wilkinson actually noticed, and subbed out Nishimura at halftime of game one for fan favorite (and longest tenured Timber) Sco-T Thompson. Sco-T got the start on Sunday and earned his keep. Danso came in later on in match 1.

Scary: Keita once again duffed more than 3 goal-mouth opportunities to score, proving once again that PGE is where aging unproven strikers from countries far afield go to die. He looked frustrated with himself for missing all the chances he had, which I suppose is a good sign, but he needs to be a striker, and SCORE.

Awesome: Ryan Pore sent the cross to Brian Farber for the first goal and scored the second one himself. I like this guy.

Scary: Danso started the second match in place of Keel, and got caught waaaay too far up field trying to help in attack more than once.

Awesome: to paraphrase John Strong: Danso can get from the opponent's penalty box back into defensive position in 12 strides.

Scary: Even with all 11 players in the box playing defense, the Timbers' defense of corner kicks and set pieces was shit. The only reason our opponents didn't score a few on these was because they suck worse than we do + a healthy dose of luck.

Awesome: We have a controlling midfield for the first time in 4 seasons. 5 seasons? Ever? For nearly all of both games, in sum, our midfield kept possession, controlled the tempo and firmly outclassed the competition. The Claesson/McManus tandem cannot be broken. McManus is good for *digging deep* and ten good hard tackles a game; Claesson isn't phased by anything and keeps the attack organized. I'm searching for a good superhero comparison for them. I'm excited to see that pair work all season long.

Scary: Thursday's match overlapped the Trailblazers playoff game but attendance was respectable (8,549). Saturday's game dropped off significantly (6,742). There's always a dip, but I was hoping for better attendance in the Post-Blazers backlash.

Oh don't start, the Blazers had a great season. There were tons of TA making the hard choice between Blazers and Timbers that night.

Awesome: The Timbers' next game is away against the Cleveland City Stars on May 9th at 4pm pacific. The newly promoted Cleveland team play in a stadium that we will only refer to as "the Cheese" (thanks John Strong and Andy Mac). Beulahland will be showing the match on their big projector, and the City Stars suck, so we may be in for a game of Harlem Globetrotters style footie.

Others on the match:
Roberto @ the Offside, Match 2 & match 3 (and yes, my points and his points are similar. It's hard to come up with ANYTHING to say that Roberto didn't mention).

The 107 Report podcast (great interviews with Sco-T, Gavin, Pore & Farber and someone else.)