The District Attorney's office has declined to prosecute Portland Police Officer Christopher Humphreys in light of enhanced audio released from the downtown jail last November, according to a statement put out this afternoon by Police Chief Rosie Sizer. 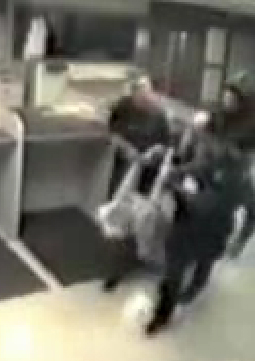 CHASSE: BEING BOUGHT INTO JAIL IN SEPTEMBER 2006...

The video, taken in the booking area of the Multnomah County Detention Center on SW 3rd—where Chasse was taken briefly on September 17, 2006, before he died—clearly showed Humphreys saying, "We tackled him." His colleague, Sheriff's Deputy Bret Burton, responded by saying "oof," imitating the noise Chasse made when he hit the ground at the corner of NW 13th and Everett. Humphreys' statement on the tape appeared to contradict what Humphreys told Internal Affairs Detective Lynn Courtney in an interview on September 20, 2006.

"I gave him a really hard shove with my forearms on his back," said Humphreys. "I mean, it tripped up his rhythm, uh, I think maybe he took one step after I hit him and he went down and I went right past him about one step."

Humphreys also told Courtney he hit the pavement, instead of landing on Chasse. However, Chasse's autopsy indicated the man suffered 17 broken ribs. You can watch the full video here.

Sizer says the incident will now be reviewed by the Police Bureau's own Internal Affairs Division.

Meanwhile, another case involving Humphreys is yet to go to trial: He is alleged to have assaulted a woman with mental health issues in SE Portland just days after completing the bureau's crisis intervention training, which is supposed to train officers to handle situations with mentally ill suspects with sensitivity.

Update, May 7, 8:02am: The Mental Health Association of Portland released the following statement this morning:

"District Attorney Mike Schrunk and Deputy DA Christine Mascal had an opportunity to amend their mistake of 2006 and failed to move justice forward again. Their failure - along with Police Chief Rosie Sizer's 32 month silence - doesn't compound doubt - it confirms doubt - in our justice system's ability to be self-critical.

"James Chasse's death was a direct result of an unwarranted attack by a police officer who is well known for his use of force - both before the death of James Chasse and afterward."

"Impunity is a poison which careful practitioners of justice recognized at a sniff. It's affect is instantaneous. It causes hesitation when a mother encounters her violent adult son, or when a clerk observes a troubled shoplifter. Who will come when I call 911? A Portland cop who's trained, experienced and compassionate - which is 99% - or Christopher Humphreys?"