My Day In the Wilderness of the Grilledcheeseburger

Last October I wrote with glee about a concoction known to me as “the Fatty Melt.” This monstrosity was composed of a beef patty placed between two grilled cheese sandwiches in lieu of a bun. The photograph itself caused me to gain three pounds and increased my cholesterol significantly. The zeal I felt for the Fatty Melt was tempered by the fact that there was nowhere in Portland where I could order one. 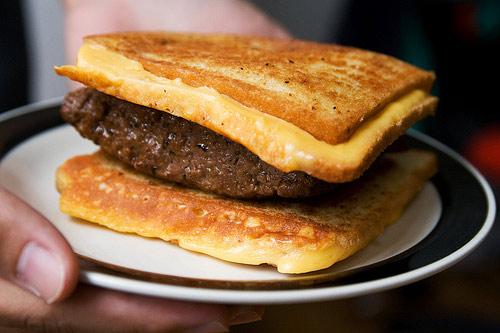 Ladies and gentleman of Blogtown, I have mixed emotions when I tell you that the Fatty Melt has reached Portland… Big time.

Responsible for the appearance of this delicious culinary leviathan) in the city are two new food carts on opposite sides of the Willamette: Brunch Box and the Grilled Cheese Grill. Recently on the awesome food blog foodcartsportland.com, there was a brief flare-up of tension as commenters debated the Fatty Melt’s (from here on known as a grilledcheeseburger) origin in our fair city. Based on what I can glean, the two carts came to the freakish sandwich independently, though the downtown cart wunderkind Brunch Box put it on their menu first as the adorably named YouCANhascheeseburger. The Grilled Cheese Grill version, known as the Cheesus Burger, has just recently made its appearance in Northeast Portland.

However, I’m less concerned by who did what when. After all, as Cuisine Bonne Femme of foodcartsportland.com noted in the mildly rancorous comment thread, “This is the revolution of open source.” So true. What I want to know is: How the hell do they taste?

Before I continue, let me just say that I do this because I love you, Blogtownies. If my heart should refuse to keep pumping (just on principle), I want you to know that the only reason I would abuse my arteries in this horrible manner is because you mean so much to me. So, I went out and ate these grilledcheeseburger mutants today. For you, godammit! For you!

I started downtown this morning at Brunch Box where a sudden sun shower lit my shameful purchase like the judgmental gaze of God. The Brunch Box is a fairly simple cart located near the center of cart alley on SW Fifth. They offer home-made English muffins and a loaded breakfast sammy that’s a steal at $3. But the YouCANhascheeseburger is what I wanted and the name rolled pleasantly from my lips. My order was taken without question. Which I find odd because if we were anywhere near sane, you’d think there would be questions. A lot of questions. And a waiver.

The wait for the YouCANhas was fairly brief, and before long I had secreted it away to the Merc office where I peeled back the paper stippled with tiny grease spots to reveal what I’d gotten myself into. 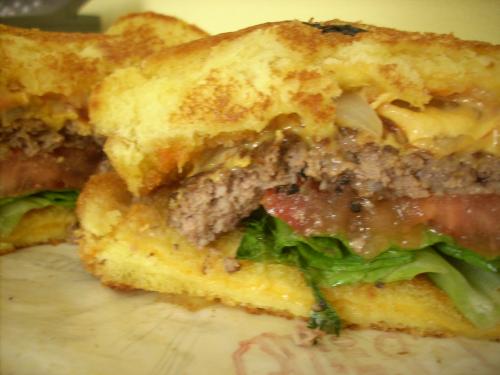 There it was. Two grilled cheese sandwiches made with thick slices of Texas toast nuzzling a hand pressed Black Angus beef patty, topped with lettuce, tomatoes, onion, mustard, and mayo. Fuck me. I think that’s what I said, but more drawn out like, “fuuuuuuck meee.” Then I ate it.

The best way I can describe the experience of eating one of these things is that it’s like a cheeseburger with way more cheese than you ever wanted. But the added benefit of the YouCANhas is the Texas toast, which adds that unctuous buttery richness. The mustard works incredibly well with the cheese and manages to lift the whole meaty mess. You’d think that the beef would get lost with everything else that’s going on here, but it actually stood up to the barrage of flavors, remaining right up front with that charred, grilled obstinacy that a good burger has.

I can’t remember the next few hours, but I woke in my office chair with mustard stains on my pants. I went to the bathroom, splashed some cold water on my face, and took a few antacid before leaving the office once more, driving toward the shiny Airstream bullet on Alberta: home of the Grilled Cheese Grill.

The Grilled Cheese Grill is the new kid on the Alberta scene, and they cut a dashing figure with the school bus they’ve retrofitted into a covered dining room. The food itself is prepared in the Airstream trailer, which when I pulled up was pumping out both the smell of grilling cheese and the dulcet tones of Bruce Springsteen. I had no need to look at the menu and its heroic collection of grilled cheese options, I knew exactly what I wanted.

“I’ve come for the Cheesus,” I said, sounding too much like a centurion in the garden of Gethsemane for my own comfort. Again, there were no questions. But like some kind of lucky totem, I was given a card to mark my order: Jesus.

“You will be Jesus,” said the woman taking my order. “I’ve been waiting for this to happen.”

The messianic overtones were almost too much to bear as I waited for the Cheesus Burger to arrive. It took longer than I expected, so I was relived when I heard Jesus called. I handed over the card and the cook passed me a brown paper bag.

“I hope Jesus is with you as you take this journey,” he said.

“He is,” I laughed, before revising the statement. “I mean, I feel like he is.”

Again, I drove back to the office to eat. And who should I meet as I walked in the door but Matt Davis, with his hungry eyes glinting. I’ve seen Davis like this before, so my initial reaction was to set down the bag and back away slowly. But I’d be damned if he was going to take the Cheesus from me. He hovered about as I unwrapped it, occasionally swiping at it with his grungy muckraking paws as I tried to take photographs. I fired off one shot before it became apparent that I would lose my meal if I waited any longer. I gave one half to Davis and bit into the other. 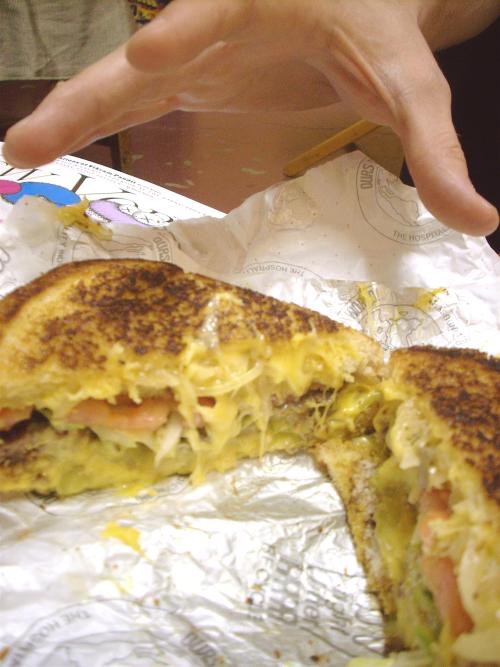 I can adequately describe The Cheesus Burger as “creamy”. Or maybe that should be “oozy”. Either way, the Cheesus required many more napkins than the YouCANhas. In terms of flavor, it was a bit less buttery, but the beef still dominated. I’d say that the Cheesus was actually closer to an actual cheeseburger in form and flavor than the YouCANhas, but still intensely cheesy.

And at last here I am with my jeans covered in grease and mustard; my mouth coated with a fine layer of fat; my heart laboring beneath the hot injection of lipids. I have come to a conclusion:

Though I’ll most likely find myself at the Grilled Cheese Grill sucking up sandwiches more often than I’ll be down at the Brunch Box, I’d say that the YouCANhas is the obvious winner in the grilledcheeseburger throw-down. There are a few reasons for this. First, the price is right at $5 (that’s three less than the Grilled Cheese Grill). Second, naming this thing after an Internet meme surely doomed to the kitschy backwaters of culture takes some guts. Third, the Texas toast is a hedonistic stroke of genius, which incidentally could give you a stroke.

I’m not sure I’ll ever eat one of these again, and I’m sure my life has been shortened for today’s experience. But I feel that we are better for having these two grilledcheesburgers in our midst. I just pray that we have the responsibility to use this great power for good.