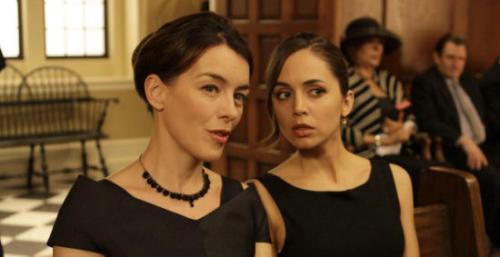 Tonight, dear friends, we see the end times come to Dollhouse. The Four Horsemen of the Apocalypse, in this case, are the Fox Executives, Miracle Laurie's inexplicable lack of vocal inflection, Alan Tudyk's miscasting (don't jump down my throat yet, I'll explain), and a serious misstep involving my precious, precious Felicia Day.

(One could argue that the whole Agatha Christie Murder on the Californian Heath Lady of the Manor episode was the nail in the coffin, but one would rather focus on Felicia Day and her luminescent glow-y skin.)

Looking back over this first and most likely only season of Dollhouse, what did we learn? We learned that the Dollhouse is more widespread and influential and eeevilll (maybe) than previously thought. We learned that anyone and everyone could be a Doll. In fact, I think "Are you a Doll? " should have been the tag line to the show.

Confidential to Joss: You can use that.

We also learned that even Eliza Dushku wearing this cannot save a show from the evil Fox Executives. (Via)

What we didn't learn this season, or have yet to learn, is why Tudyk's acting chops were wasted on Alpha when he would have made an amazing Agent Paul Ballard. I love Tahmoh Penikett's cheekbones and sideburns and um, WICKED HOT BODY as much as the next person, but I'm sorry Helo, you were woefully miscast. Earnest and driven? Check. Sweet and sad? A little. Complex and a little crazy? Eh...not really.

Tudyk would have acted the shit out of the Ballard character (as he is doing with Alpha but two episodes? Really?) especially in that scene where Miracle Laurie comes whining into Paul's apartment only to find a devolved and raving Ballard painting his cave with his Caroline obsession. Apologies to Mr Penikett but this scene was just too faceted for him and he failed to deliver a performance showing the complexity of a man whose desire has twisted his judgment into something a bit wild.

Moving on, I know that Joss' characters and plot development tend to have a long arc (which is what I love about them) but at the same time, he should know by now that standalone episodes are hokey,boring, and pointless. They pander to an audience who will never get his humor and worldview anyway so why make these idiotic episodic shows when the series is meant to be viewed as a whole? I have to believe that these episodes were the fault of FOX because if they weren't then...um...well, I give up. I WILL GIVE UP ON YOU JOSS WHEDON! DO YOU HEAR ME UP THERE IN YOUR GOLDEN CASTLE MADE OUT OF UNICORN JUICE AND SPACE MAGIC?

I'm not going to get into the whole feminist problem with the Dollhouse hooker dolls because uh....zzzzzzz.... but I do want to give a figurative slow-hand-clap-turning-into-a-standing-ovation for Olivia Williams' portrayal of Adelle Dewitt - some of the finest television acting I've seen in well, ever. Amy Acker's wounded animal interpretation of Dr. Claire Saunders was mesmerizing and criminally underused. Too much screen time was given to Miracle Laurie's rack and while I can kind of understand why (BOOBIES) if I had my druthers, the entire series would have consisted of a dinner party at Alan Tudyk's house with Acker, Williams, Harry Lennix, and Felicia Day as the only guests. And obviously everyone would be naked and drunk.

Mark my words, ten years from now, someone* will be kicking themselves for not seeing the genius of that idea.