Thursday's game was cast under a shadow before it started: Hartmut Bless, a longtime Timbers Army member known as 'Timber Howie,' (I called him 'The General') passed away. Howie was always the first in the park, always standing in front of the same seat, and one of the kindest, most welcoming and encouraging people I've had the pleasure of knowing.

taken from Culturepulp
The Army decorated his seat, and a moment of silence preceded the National Anthem. RIP Howie, We toast your honor.

Howie touched our hearts over the years, but I'm convinced he touched this game too.

The Timbers do not have the best record against the Rhinos, but they came out firing on all cylinders this time and were playing a loose but controlled game, keeping the attack organized and pointed squarely at Rochester goalkeeper Vallow.

The Timbers scored in the 40th minute when Farber finished a cross from Keita with a ridiculous overhead scissor kick.

The second half was a angry affair, with a Rhinos player receiving a straight red card for a two footed tackle. I thought it was a weak tackle for a straight red, but it was the 5th hard foul from the Rhinos and something needed to be done.

Strangely enough the Rhinos managed to turn the red card into positive momentum, and they scored 6 minutes later on a loose ball in front of the goal on a set piece. Our set-piece defending still sucks.

The last 20 minutes of the match were contentious and evenly matched, but the melancholy Timbers Army still sang. 3 minutes into stoppage time, Howie smiled down on the Timbers from above: the ref noticed—and had the balls to whistle—when a Rhinos defender leveled Keel in the box with a two handed shove, away from the play.

Ryan Pore stepped up and stared down 3 minutes of unsportsmanlike bullshit from the Rochester players, especially the GK (who got a yellow card for time wasting), and slotted the ball inside the left post, sealing the win for the Timbers. We lost our friend, but he left with us memories with of fun, laughter, friends, and a goal. the HOWIE GOAL. 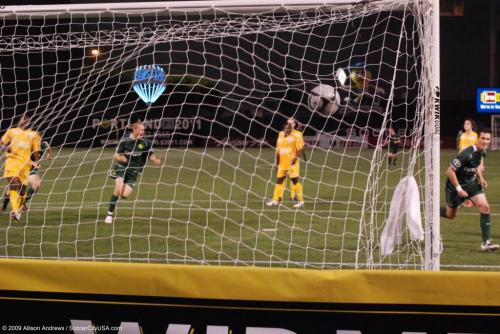 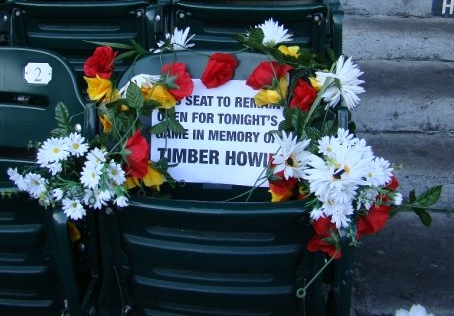 Photo courtesy of Leanne Eager
If you enjoy articles like this, please help the Mercury continue our mission of providing up-to-the-minute information, progressive journalism, and fun things to do in Portland by making a small recurring monthly contribution. Never forget: Your help is essential and very much appreciated!
CONTRIBUTE NOW