Beavers' Stadium: No Numbers to Gnaw On

“We’re here to get the facts,” said Lents Neighborhood Association chair Damien Chakwin to over 70 neighbors who packed into the Lents Elementary School cafeteria tonight to discuss the Beavers ballpark possible slated for their neighborhood. “We should get some information before we make a decision.”

Sadly, there were few facts for the neighbors to discuss. The city and stadium-backer Merritt Paulson have not hammered out the financial details of the ballpark, so despite strong feelings on all sides of the issue, the neighborhood had no final plans to discuss. In a draft budget released last week, Lents Urban Renewal Area would kick in $42 million to build the Beavers a stadium Lents after major league soccer displaces them from PGE Park.

Commissioner Randy Leonard started out the night with a ringing endorsement of the idea: “Putting in a Triple-A stadium is the best thing we could ever possibly do for the neighborhood.” Neighbors were more skeptical. 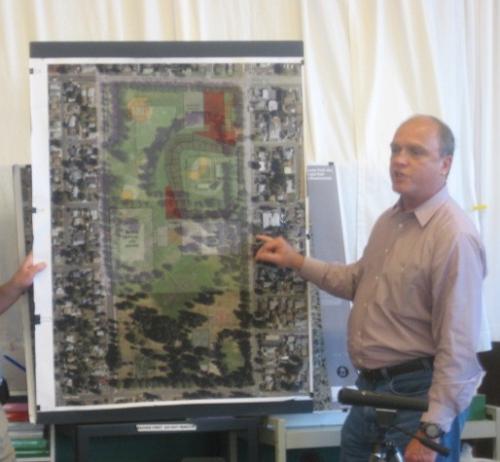 When a neighbor asked Leonard to get specific about the “nebulous economic development” the stadium would bring, Leonard responded, “Your language betrays your position. The benefit isn’t nebulous at all.”
“Could you point me to something that has concrete details about this?” the neighbor pressed. Beavers’ rep Greg Peden responded: stadium construction would produce 300 union jobs over two years and create approximately 250 permanent jobs running the stadium.
“Then is information out there that will definitively say what the impact of this stadium would be?” another neighbor asked.
“Yes,” replied Leonard, simply. When asked after the meeting what definitive evidence he was referring to, Leonard pointed to the Stanford study of San Diego’s stadium (which another Stanford economist refutes here), a study of a Sacramento stadium (which he couldn't remember the name of) and a study Urban Renewal Advisory Committee chair Cora Potter mentioned during the meeting.

But Potter says that study — in which PDC consultants analyzed Lents businesses — does not definitively show what impact the stadium could have on Lents. The truth is that currently no hard data exists that lays out the economic impact of a stadium on Lents. The PDC just recently commissioned this type of study from consulting group EcoNorthwest and asked them to condense their typically several-month timeline into a couple weeks, hoping that the urban renewal committee will have some actual data to look at before it votes on whether to put $42 million toward the stadium.

In a straw vote at the end of the at-times tense and rowdy two hour meeting, about half of the neighbors opposed the stadium. A smattering of neighbors supported the stadium and a fair number in the middle were undecided — waiting to decide until more solid information surfaces.