The Hunt for Koi Fusion 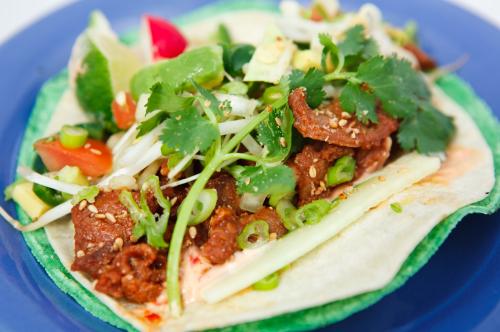 The hunt for Koi Fusion would not have been that hard if we hadn’t been mislead by a tweet that took us into NW Portland. Then we lost connection with Twitter on the iPhone, thus missing a its actual location. Erik got grumpy. We were redirected by construction. We gave up. The whole situation reminded Alison of Adventures in Babysitting. I wholeheartedly agreed.

We developed a plan for the following day: I’d allow live updates to my cell from Twitter for both @PDXfoodcarts and @Koifusion. That way, we’d know where the much buzzed taco truck with its payload of Korean tacos would land, and how long it would be there. Unfortunately, the truck was sidelined for some routine upkeep.

Today, finally, I received the location (SW 6th and College) and the time (Noon to 2 pm) and made damn sure I’d be there in time to get a taco or two.

The Koi Fusion truck was hidden just off the PSU campus behind a market on SW 6th. I wasn’t actually sure I’d made it to the right place considering the sign on the side of the truck proudly read Rosali’s. But then I noticed a group of foodie-types huddled in the shadow of the market; a strange sort of bliss-filled listlessness surrounding them like thin smoke from a grill. They weren’t in line, per se, but it seemed as if at any moment they might spring into line. You know, just right after they finished chewing. This had to be the place.

The Koi Fusion truck is one of the lovely modern taco trucks, with the cooler in the side for an assortment of cold drinks, and a high window covered in blue plastic. I’d been anxious to taste this strange new trend ever since Alison told me a few months ago about Kogi BBQ, the storied Korean taco trucks of LA, which have garnered quite a reputation.

I was understandably anxious as I waited to order—the chatty young proprietor happily talking to a customer about his brand new venture.

“I wasn’t sure about the tofu,” he said.

“Dude it was awesome,” the customer replied.

Then it was my turn: one bulgogi taco, and one spicy chicken taco, both with cilantro, bean sprouts, and kimchi (I actually think the owner called it “Korean cole slaw” for my benefit).

As I ate, an antsy crowd began to form, ready for the taco love. The proprietor leaned out the window.

“Are you all following us?” he asked, referring to Twitter. There was a silence as half a dozen heads nodded in unison.

“Oh man, did you read about that in Giant Robot? There’s these trucks in LA.”

“Yeah, they were in Giant Robot.”

“Those guys are my buddies! They gave me their blessing and a couple recipes!”

As people lined up there was often explanation as to why certain meats weren’t available that day (short ribs, for instance, were my first pick). It seems that somewhere in Portland a mother is marinating beef. That explains a lot. I’ll reserve my judgment on the tacos because Koi Fusion is far too new to be critiqued. But it would behoove you to find them, eat a taco or two, and let them know what you think. I’ll be including them in a late summer edition of Travels in Tacoville. In addition to the Korean tacos there is also a full Mexican menu.

When I was leaving, the Asian couple had finally decided on what to order.

“Can I have a Korean taco?” the small young woman asked.

The young woman let out a short gasp that was filled with memory and pleasure. “How did you know?” she asked.