The committee overseeing the design of the new light rail, bike-ped bridge over the Willamette split today on which bridge design they should move forward. A majority of the 14-person group opted for the cable-stay bridge, which is the cheaper option, but a small group pushed to have a "minority opinion" written up in favor of the originally-approved hybrid option design.

The differences between the two designs are subtle. The biggest difference is that the cables on the hybrid option (below, top) swoop will a soft curve in the middle while the cable-stay option comes together in a straight V (below, bottom). "The hybrid is a little bit riskier but a little bit more innovative," says TriMet's Rob Banard. 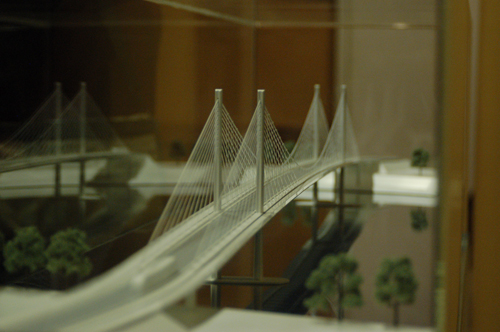 Hybrid bridge, as presented a month ago. Photo by Matt Davis.

But the cost is what made the difference for many committee members: At $102 million and $110 million, the two cable-stay options are projected to come in under Portland's $135 million chunk of the bridge budget, while the $138 million hybrid bridge is three percent over. While the federal government is covering an undecided amount of the bridge budget, the city is scrambling to come up with its share of the cost.

So is the cable swoop worth the extra $29 million pricetag? "I like the spatial action that it lends to the bridge, rather than just being a straight corridor," said architect Thomas Hacker. "These renderings are beautiful, but the only people who would have the opportunity to see that view are the news room helicopters," summed up Metro Councilor Robert Liberty, siding with the majority.

Newly-hired architect John Donald Macdonald spoke up in favor of the cable-stay design, too, saying it "fits better into the geometry" of the existing bridges over the river. The hybrid's swoop "looks like an afterthought, you put a cable up there for this vision," said Macdonald. "For your budget and what you're doing, you're spending the money for such a little piece. I would rather see that money used on the details like lighting." "The lipstick!" hissed architect Brian Libby, sitting next to me in the crowd.

Libby and other architects raised the alarm last week after TriMet replaced the original bridge architect, Miguel Rosales, with a new firm, Macdonald architects. TriMet chose Macdonald for his experience - with similar bridges, no doubt, but likely also his diplomacy skills.

"I've been through the battlefield of many public hearings," acknowledges Macdonald. He seems to be a stickler for detail - while showing a picture of a massive bridge, Macdonald would key in on the shape of a certain light or handrail. His firm's most innovative design crosses the marina in Dubai (Dubai!) and is, as Macdonald put it, modeled on the shape of a peregrine falcon, which Arabs use to hunt.

MacDonald has worked on a series of white cable bridges and bike/ped bridges across the country, including the Cooper River Bridge in South Carolina, the east span of the Oakland bay bridge and a bike/ped bridge in Berkeley that was the result of "16 or 17 public hearings."