Brian Borello skidded up to the curb outside American Apparel on East Burnside last night and parked illegally. The thin, frenetic artist with black-rimmed glasses, well-worn work gloves and messy gray hair did not waste a moment — he was racing the sun.

After two and a half years of process, Borello and fellow artist Vanessa Renwick are working up to the last minute to unveil a new piece of public art Friday night: a 16 foot tall solid steel pile for Zoobomb bikes.

That's right, Zoobomb is getting offically cemented into Portland's public space. Just a few years ago, the raucous group of bikers who meet every Sunday night to ride kid's bikes at breakneck (or, more often, break-teeth) speed down the steep slope of Washington Park was on the outs with the city — police targeted the group as a potential terrorist cell in 2003 after missing the humor in their anti-war slogan "Bomb the Zoo, not Iraq!" More recently, police cracked down on the group for traffic violations and even confiscated the entire "holy pyle" of minibikes chained to the bike rack outside Rocco's pizza.

But two years ago, the Regional Arts and Culture Council awarded a $10,000 grant to Borello and Renwick to turn the impromptu bike pile into official public art. The new sculpture will be located a few blocks away from the current pile on the corner of 13th and Burnside. 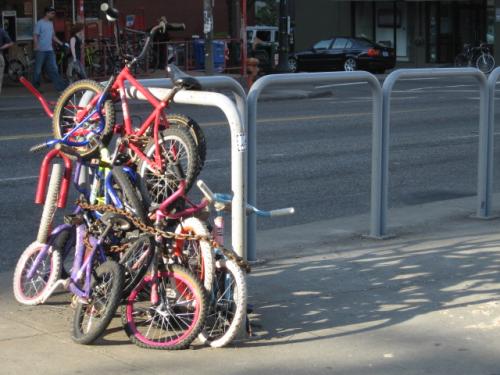 Out with the old!

Zoobomber Mykle Hansen says when the city (particularly then-commissioner Sam Adams) first approached the amorphous group with the idea two years ago, they didn't quite know how to react. "There was a lot of mistrust going on with the city. We’ve come to understand that the city has many parts, but once upon a time, the city was the cops who confiscated all the bikes, the city was the TriMet security who go all agro."

Borello and Renwick showed up to the table with no designs of their own - the duo wanted the actual people who will be using the sculpture to guide its design. Of course, getting the city, the artists and the mishmash of Zoobombers to agree on the design details of a single, permanent icon for a group defined by its undefined nature anything but easy. "By being so inclusive, we’ve brought together a lot of people who never promised to agree on anything except that we like riding bikes down a hill really fast," notes Hansen.

The city quickly ruled out anything shaped like a bomb and the cyclists agreed that all final decisions would be made up on the hill, not at city hall or via email. "On the hill it’s basically walking around with a bike light and a bunch of paperwork in your hand saying 'Hey, this is what’s going on, what do you think of this?'" says 'bomber and Sprockette Shannon Palermo. After months of workshops and "design seances" the groups finally hammered out the sculpture details.

But, the exact look of the new pile is a secret. The public will not see its final shape until the big unveiling parade and party at 4PM tomorrow.

UPDATE: details changed at the last minute after a "surprise unveiling" was deemed too difficult. As of this afternoon, the sculpture is already up and exposed on the corner of E Burnisde and 13th. It's a tall brown spike with a gold-plated minibike on top - around the spike are metal circles people can chain bikes to for public use on Sunday nights and the base has a hatch that opens to store helmets and a first aid kit. The official opening parade with Sam Adams is still on for tomorrow at 4PM.

"What we tried to get at with this sculpture was to make something with an open end to it," said Borello last night as he unloaded gear onto the corner next to American Apparel. "The sculpture will change shape depending on how many bikes they put on it and where."

Borello and friend Ray Erickson set up cones to make themselves look slightly more official before flipping on a generator and aiming a small drill at the sidewalk section designated “ground zero.”

An American Apparel employee wandered out, casting the tools a skeptical look as she headed to the Dumpster with two trash bags. “We’re installing the Zoobomb sculpture!” Borello shouted.
“Oh sweeeet!” replied the young woman, who was wearing a skirt the color and size of a cherry tomato. 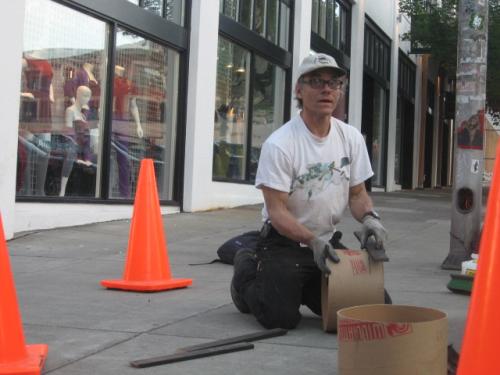 "Is this a monument?" I asked Borello. "No," he replied, over the whir of a jigsaw ripping through carboard tubes. "I don't know. I hate to say it's a monument to bike culture because bikes should just be part of culture. It's monumental."