Last Night at the Drammys 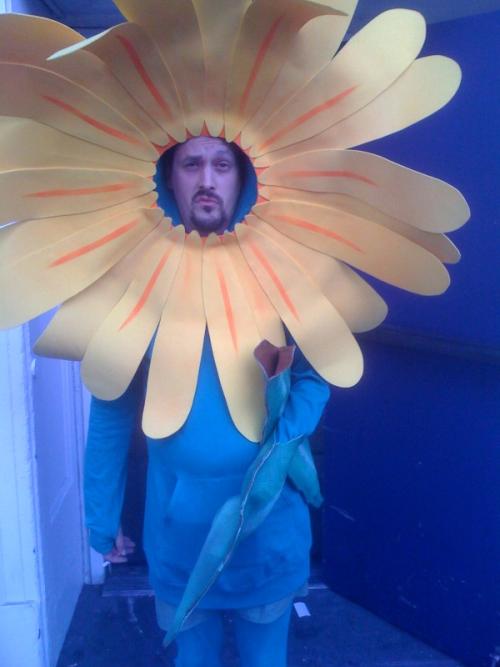 [Sorry the promised live coverage didn't materialize. My roommate's cat knocked over a glass of water on my laptop last week, which totally harshed my blog.]

So last night was the 30th annual Portland Drammy awards, an ceremony that promises to recognize deserving members of the theater community. This is accomplished by giving out multiple awards in many categories, bringing different local theater professionals onstage to present each award, and, this year, in celebration of the anniversary, recognizing 30 "unsung heroes," a thoughtful gesture that added at least a half an hour to the proceedings. At this point, it's like your fourth grade soccer team party at Guido's Pizzeria [that's what it was called! not racist.] where awards like "Perkiest Ponytail," and "Best Reflexes, for a Fat Girl" ensure that everyone who played gets an award. (I should also note here that being trapped in a room for two hours with several hundred actors is not too far from my personal definition of hell. Basically it's like going to a party at which all of the guests know you've talked shit about them.)

Hosts Maureen Porter and Philip Cuomo did an admirable job keeping things moving (and reinforcing the impression that Third Rail is one of the most likable troupes in town), but it was a bit of a long evening even so: the upstairs bar was closed, so refills required ducking down to Lola's; every presenter was encouraged to tell a joke before announcing the winners (note: this is a bad idea); and the sound at the Crystal was predictably terrible, so it was tough to hear what was going on a lot of the time. But the crowd looked pretty and everyone was excited and schmoozy, and despite the inconvenience of the bar situation it seemed as though folks managed to have some fun. (Todd Van Voris, I saw you bolting up from the bar before the Best Supporting Actor awards were announced.)

It was a big year for musicals—Broadway Rose and Lakewood swept it, picking up the two Outstanding Production awards, as well as Best Director nods, for Les Miserables and Into the Woods, respectively. And I have to say, this is a problem for me. Les Mis was an impeccable production and I have no doubt that Into the Woods was fantastic as well—but, as some angry drunk girl put it after the show, "We're really going to reward shows for taking no risks whatsoever?" I sincerely mean no disrespect to these productions, but it's dismaying to see smaller, more ambitious shows overlooked in favor of the big and the safe, particularly since the Portland Area Musical Theater Awards are in what, a week? I don't know if the Drammy committee is: trying to undercut the potential relevance of the newer PAMTA's by welcoming musicals at the Drammys, since they sure as hell weren't this well represented last year; disproportionately made up of old people from Lake Oswego, who just can't get enough of that Jean Valjean; or just genuinely underwhelmed by everything else happening in Portland theater this year; but what a strange showing. And! Would it kill you guys to put together a short list of nominees before the show? Not only would it be interesting to see what a top-five short list looked like, but it seems like attendees would be more invested if they knew they might win something...

I'm almost done nitpicking, but I reserved some ire for the best Supporting Actress category. Ana Reiselman won for her performance as a pagan street kid in Holidazed, through which if I remember correctly she mostly just rolled her eyes and acted surly. The other award went to Lisa Renee Pitts, who was stellar in Doubt—I'd say the scene in which she basically asserts that she doesn't care if her son is being molested, as long as he gets an education, was one of the finest on PCS' stage all season. But (and I don't want to reignite the should-the-Drammys-stay-local argument, but it's worth noting) Pitts is from L.A., imported for that production; and I just don't think Reiselman earned it. I mean come on. Anyone see Amanda Soden in The Uneasy Chair? Maureen Porter, who was dynamite in Dead Funny? The awards in that category seemed like a snub. I was pleased to see Sharonlee McLean and Valerie Stevens pick up much-deserved awards for Best Actress, though I would've liked to have seen Amy Newman's name on that list for her turn in Freakshow. Nice too that Samantha Van Der Merwe picked up a Best Director nod for Statements after an Arrest under the Immorality Act.

Other moments of note: A perhaps-not-entirely-sober Garland Lyons cracked my shit up when he strolled onstage in a white suit to accept his (well-deserved) Supporting Actor award; the quote I have in my notes is, in response to a heckler: "What was that? Sit down, Mom, you're drunk." Storm Large's decision to admonish people at the back of the room for talking (by "admonish," I mean "yell 'shut the fuck up'") and to remind them that they're here to "support members of their community"... well, I'm guessing it didn't sit well with certain members of the community. Like those who have been in it for more than three years. Just a suspicion. Accepting the award from Nancy Keystone's (outstanding) Scenic Design in Apollo, Chris Coleman said, "I appreciate those of you who came to see it, and especially those who stayed the whole time," which was wry and accurate and funny. How To Disappear Completely and Never Be Found swept the production categories, and rightfully so, with awards for scenic, lighting, and sound design. The immediate and enthusiastic standing ovation that greeted Mead Hunter as he accepted PATA's spotlight award was great to see.

Check out the complete list of winners here, and feel free to drop your anonymous vitriol in the comments. (Also, speaking of theater people anonymously shit-talking: Would somebody please start a local theater blog that isn't a total waste of time? Followspot is in the pooper since Tim Kraus signed off. Art Scatter and Culture Shock have great coverage from time to time, but there's definitely room for a dedicated local theater site, I think.)