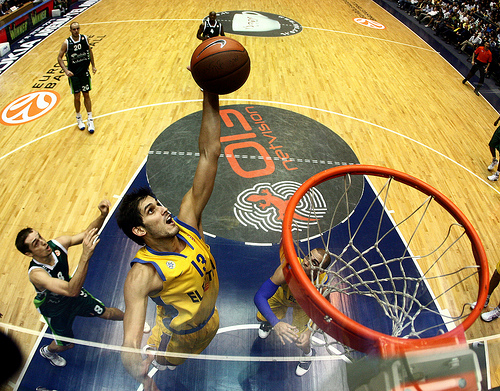 Omri Casspi: This slam-dunking Jew could be ours!

We are two weeks away from the 2009 NBA draft—and days away from the Orlando Magic's miraculous championship victory over the Los Angeles Lakers (What? It could happen.)—so it's about time we check in on your Portland Trail Blazers.

The last time we saw the Blazers we were bidding them farewell, signing their yearbooks ("LaMarcus, you are the best. Hope 'ya get laid."), and wishing them a rad summer at camp. But since the team has a history of making its biggest moves during the offseason—thanks, Kevin Pritchard—we contacted a man who knows more about the team than just about anyone on earth, Benjamin Golliver of Blazers Edge. The very wise Mr. Golliver was kind enough to take time away from his jet skiing vacation with Andrei Kirilenko to answer our questions about who the team will be drafting/trading, the future of Jerryd Bayless, and how Sergio Rodriguez is more of a benign cyst than a cancer.

Who are the Blazers going to draft?
Always a tough question, made tougher this year because the Blazers are seeing fewer prospects than usual here in Portland. Somehow I wasn't able to make it out to Treviso, Italy, last week to scout alongside General Manager Kevin Pritchard so it's hard to know how he feels about what he saw there. Also complicating the matter is the fact that the team insists on drafting the "Best Player Available" even though they only have two clear needs: point guard and backup power forward. So, yes, it's a crapshoot.

Of the prospects they've brought in to Portland so far, I like two names: Omri Casspi and Wayne Ellington. Casspi would be the first Israeli to play in the NBA so by definition of the phrase he should probably be a "Trail Blazer." He also slots into most draft boards around the time the Blazers are picking first (#24). He's only 20 years old and willing to play in Europe next season which is good, because he plays Small Forward and there are currently 543 small forwards on the Blazers 15 man roster. They could handle him like they did Batum: make the call about whether to bring him to the NBA after letting him run in the Summer League. Ellington is a pure shooter who won an NCAA championship at North Carolina and is the type of player the Blazers have looked at in the past in the second round because he's a known quantity so there's little risk. He was a McDonald's All-American so he's probably been scouted by the team for 5 years now. Ellington has the personality to be comfortable with limited minutes in his rookie year while still having a winner's mentality. It's not like the Blazers need any help at the shooting guard spot with Brandon Roy and Rudy Fernandez but if he's still available in the second round I think the Blazers take a look.

The guy I would most like to see targeted was actually a college teammate of Ellington's: Ty Lawson. He is a short, quick, penetrating point guard who knows how to take care of the ball and dish out assists in traffic. His game complements Bayless' nicely and hopefully he would help prevent Aaron Brooks from averaging 30 points and 15 assists against the Blazers in next year's playoffs. He was originally thought to be a late-lottery pick but he is sliding on some draft boards. If he's available at 24 I think it's an absolute no-brainer. I like him enough to trade up to roughly the 15th pick or so if necessary to grab him.

This is all assuming the Blazers even draft in the first round, which is no guarantee. There is some financial benefit to trading their first round pick and saving the money for free agency.

A footnote: the Blazers have 4 picks in the second round. Look for the Blazers to use no more than 2 of their picks and trade the others for future considerations or in part of a package deal to move up in the draft or for a veteran.

Who are the Blazers going to trade for?
Really? Could we get more impossible? What's the temperature going to be on February 15, 2014?

At one time or another this off-season the team has expressed confidence in the following players: Brandon Roy, Greg Oden, LaMarcus Aldridge, Steve Blake, Joel Przybilla, Jerryd Bayless and Nicolas Batum. Although he hasn't been mentioned by name it's hard to see Rudy Fernandez being traded because of his small contract and huge marketing power, although maybe he gets tossed into a barnburner. If the Blazers are true to their word and don't want to move any of those guys, that leaves only the roster's scraps up for trade so you can forget getting a big name back in return.

Owner Paul Allen recently stated he was comfortable going up to the salary cap but not exceeding it which should also dampen trade expectations. If the team can find another franchise looking to shed salary thanks to the recession, they can actually use their cap space to take on a new player without necessarily trading anyone away. This is kind of a complicated scenario... to read 3,000 words about this and a list of players the team might be able to grab for (next to) nothing, click here.

Will the 2009-10 season be the breakout year for the misunderstood soul that is Jerryd Bayless?
Absolutely. Let's say Bayless had stayed for his sophomore year at Arizona and then came out during this draft: I think the Blazers value him as the #2 or #3 best prospect in this draft. They are that high on his upside, work ethic, and physical skills. Nate McMillan and Kevin Pritchard both rave about him in interviews and they will be turning the Summer League team over to him in July. My guess is the emphasis this year will be on running the point, involving one's teammates and being a vocal leader rather than putting up ungodly scoring numbers and taking home the MVP like he did last year. Without question, Bayless's performance in Summer League is one of biggest emerging storylines of this off-season.

To take it one step further, I think this training camp has the potential to shape up a lot like two seasons ago: Nate will toss the job up in the air and Bayless will play the role of Jarrett Jack, trying to wrestle the position away from Steve Blake. Remember, Jack actually beat out Blake two years ago before folding during the beginning of the regular season. I give Bayless a 40% chance of winning the starting spot but everyone, including multiple people in the organization, think I'm crazy for saying that. We'll see.

By the start of next season, Sergio Rodriguez will be:
(a) Traded to the Knicks.
(b) Serving tapas at Toro Bravo.
(c) Still rotting on the Blazers' bench.
(d) Beating me up for saying such terrible things about him. (If his punches are anything like his passes, he'll probably miss me)
I would not be surprised at all if the 2009-10 season is Sergio's last in the NBA and I don't see any way Sergio is back in Portland for his victory lap. He doesn't buy into Nate's system, he doesn't like his role on the team, he hasn't proven he can play defense and his shot is ugly. On multiple occasions, his representatives float ridiculous trade scenarios in an attempt to force a trade. I'm not sure he's important enough to call a "cancer"... maybe he's a cyst.

I'm sure Portland management is 1) more than glad to explore trade possibilities 2) finding it difficult to get anything worthwhile for him. In the best case scenario, Sergio gets packaged with picks and/or money to get a better draft pick or a serviceable role player. I'm sure Pritchard has scoured the league looking for just such a scenario. Say a prayer on draft night.

P.S.
I'm not sure why Sergio wants to play for New York so badly. As the weakest player mentally on Portland's team last year, let's see what the New York media does to him.

With Utah besieged by injuries—and Denver besieged by crazy-ass players with bad tattoos—do the Blazers win the division next year?
The championship window is officially open. The next step towards that goal is the outright division title and the Blazers are constructed for maximum regular season success: a very deep roster filled with guys that compete hard every night and still haven't had the big pay day yet. It's not unreasonable to expect another jump in total wins.

I think a division title is the proper expectation and they would seem to be the odds-on favorite, particularly if Kevin Pritchard resists the temptation to ride out Blake for another year and makes a move for a true starting point guard.

But everything hinges on two things...
1. Brandon Roy's health: this is a lottery team if he goes down for any extended period of time. He's that good and that important to the team's success.
2. How seriously Greg Oden takes this off-season. If he comes back in monster shape and is ready to start proving the doubters wrong, watch out. If he's spending his whole summer getting drunk with hot asian coeds, then who knows.