Mayor Will Not be Charged with Criminal Wrongdoing

UPDATE 1:15 pm: Read about Attorney General John Kroger's noon press conference and why the AG department will not be going forward with charges of sexual and office misconduct against Mayor Sam Adams.

The Attorney General's report is in...download a copy here. At first reading, Adams appears to have been cleared of all criminal charges, looks like there are credibility problems with Breedlove. 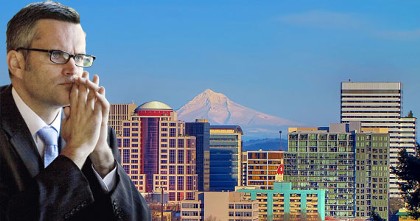 This just in from John Kroger's office:

What: Attorney General John Kroger will take questions about the Oregon Department of Justice’s investigation into Portland Mayor Sam Adams.

Cue massive bottleneck on the I-5...

We'll have updates and video for you right here, as soon as we have them.

Update 2, 9:47:
"We're going to be releasing a statement this morning and we need some time to go through the report but we will be doing media interviews today," says Adams' spokesman Roy Kauffman. We're on the list.

Update 3, 9:52:
On the charge of official misconduct and illegal sexual contact with a minor...

Update 5, 10:06:
"We know the Attorney General can only press charges against Adams in a case that he can win," says Jasun Wurster of the Recall Sam Adams campaign. "So we totally understand why Mr.Kroger chose not to press charges. However he cannot hold Adams accountable for his civic and ethical transgressions against the citizens of Portland, and that is what the recall will do starting July 7."

"We knew charges were either going to come, or not," says Wurster. "And they would be either egregious charges or less serious charges, or that the Attorney General would realize he could not win a case, and we have been preparing for all three scenarios."

Update 6: 10:11:
"I think some of the damage has been done for a lot of people," says Bikeportland editor Jonathan Maus, a fan of Adams' efforts to secure bike funding in the city. "But I think this helps Adams' case, and it confirms for me that the recall isn't going to work."

"Whether the kiss in the restroom in happened or not, there have been a lot of media reports about Adams' alleged untruthfulness," says Maus. "And whether or not they're true, I think those things had a strong impact."

"I think what we've found over the last few months is that biking is bigger than just a mayor, it's about an entire city council," Maus continues. "Adams is not irrelevant, but he's not the only one who can make things happen for biking in this town."

Update 7: 10:17:
"This makes total sense to me," says former WW staffer and prominent Adams supporter Byron Beck. "This has always been about a very opportunistic young person who was looking for his fifteen minutes. They're done, it's over. Thank God."

"It would be terrible if he lost office because he was a mayor who had sex," Lauderdale continues. And on Breedlove? "He's just a young kid. I wish him the best of luck and I hope he has a good life."