Portland's Streetcar Born in the U.S. of Fuckin' A!

Obama Transportation Secretary Ray LaHood came to Portland this morning. Standing next to the nation's largest platinum LEED building at the base of the aerial tram in the shadow of the South Waterfront manufactured high density community, LaHood announced, "Portland is the transportation capital of the our country, the green capital of our country, the streetcar capital of our country, the livable community capital of America!" Then, at the end of his speech, just before unveiling the first streetcar manufactured in American in 60 years, LaHood repeated the line verbatim AGAIN, to thunderous applause. Now there's a man who knows how to whisper sweet, sustainable nothings into Portland's ears. 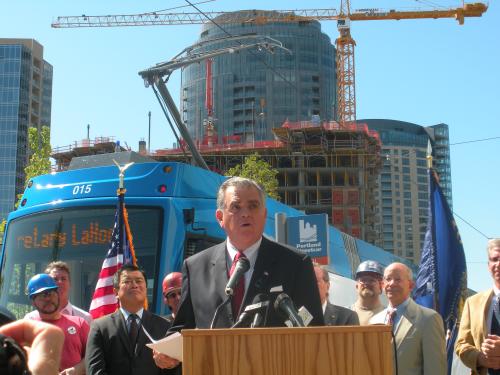 Yes, indeed, Secretary LaHood along with a host of other politicians, including Governor Kulongoski, Congressman Pete DeFazio and Congressman Earl Blumeneaur (who graced his second transit-unveiling press conference in two days), were very very proud to release the first American-made streetcar since the auto industry killed streetcars 60 years ago.

"This is a great, great accomplishment, I believe this is the dawn of a new era for transportation in the USA, a new opportunity to claim 'Made in America,'" gushed LaHood, gesturing to the red, white and blue streetcar which was built at a cost of $2.9 million (with 90 new jobs created) right in state at Oregon Iron Works. 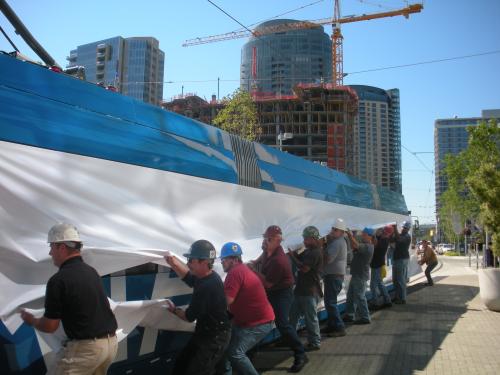 There was political high-fiving all around. "Thank you to the legislature for passing my Jobs and Transportation Act, the largest and greenest long-term investment in Oregon's transportation history," said Gov. Kulongoski, hilariously glazing over environmentalist's complaints that the act included only a tiny sliver of funding for bikes, ped and public transit.

The only person not engaging in the jobs-green transit-love fest was sulky Jonathan Maus, of BikePortland.org, who shook his head in disdain at the photo opp. For less than the $77 million cost of the first 3.3 mile streetcar extension, Portland could build the nation's best bikeway network, with hundreds of miles of bike lanes. "Streetcars are great, but at what cost? Where's the similar dedication to bikeways that cost nothing in comparison?" said Maus. "In politics, things that are cheap and easy don't always win - there's no money behind them."