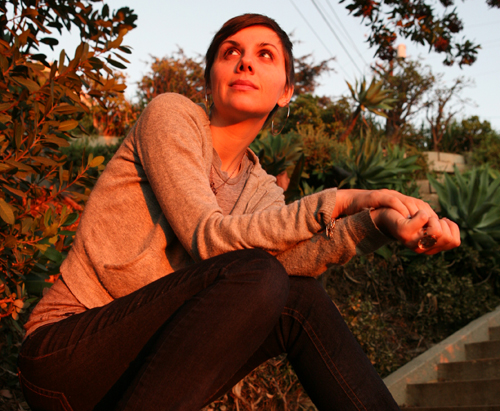 All my life, I've wanted to be like Jessica Hopper. She's the author behind famed zine Hit it or Quit It, plus the master of countless musical endeavors—skilled writer, former publicist from back in the day, music farmer for This American Life, and even readers of Heavier Than Heaven will recognize her from the final days of Kurt Cobain. With her first book, The Girls’ Guide To Rocking, on stores shelves right this very second, we let everyone's best pal, Joan Hiller-Depper, interview Hopper about the book, Ira Glass' car, and how to piss off The Eagles.

Interview after the jump.

HILLER-DEPPER: I say this for a number of reasons, not the least of which is that, (both in the spirit of full disclosure and to reiterate that I am talking real talk) without having had the good fortune to work with Jessica Hopper at Hopper PR (formerly Hyper PR, now RIP) in Chicago throughout the early ‘00s, I would not be doing what I’m doing today. Hopefully, throngs of young folk, girls and boys alike, will grab The Girls’ Guide To Rocking, buy it, and be able to say a similar thing about her influence on their development in the music universe.

From the simple act of picking an instrument, starting a band, writing a song, playing shows, self-promoting or purchasing equipment, Hopper's brilliantly organized book effortlessly tackles broad subjects thoroughly and in great, great detail without being mired in non-essential minutia. There is technical info in The Girls’ Guide To Rocking that I, a grown woman who has been in bands and/or “the business” for 15 years, didn't know. The following is a conversation with the author, who you should come meet tonight.

This is your first book tour, but not your first tour-tour. Can you tell me exactly how you are rolling? Are you and Katie Stelmanis doing it like Gillian Welch and David Rawlings in a Cadillac or what? (Side note: Hopper is touring alongside Stelmanis, who brings the jams; watch the video for “Join Us” here)
Well, my July tour is via plane, but not a private plane. The August tour is a caravan of late-model Hondas. Katie seems to think that her five-piece band will be comfortable in her car. My car is just me and my book roadie/BFF Morgan… it’s an all girl tour.

Is your ride still that car that you bought from Ira Glass?
Yes. He would be appalled at how dirty I have made it. It is like a depot of Chipotle cups and promo CDs.

Speaking of promo, tell me a little bit about what you feel like the most important thing is that you want to get across to folks who are coming to see you speak/read on this book tour.
The big message of the book, and the book talks, is that there is no one right way to do this; there is not a singular proper path to playing music or being in a band. Whatever ideas and sounds and methods make sense and are natural to you, that’s what you should pursue. And that rock and roll belongs to girls as much as it does boys. You don’t have to be "good," or know how to play Doors songs, in order to rock.

Super duper absolutely. Why do you think that people, particularly young female people, end up feeling like there is a certain set of rules you do have to follow—that certain things are off limits to them?
Well, I think beginner players are often presented with that idea. A lot of the women I know have these totally comical horror stories about just wanting to play music, and suffering through these bands with mean teenage boys who chastised them for not being able to play Metallica songs. Marissa from Screaming Females told me about having to learn Phish and Ween covers in high school, which she did just so she could be in a band. I think playing music is about the most fun thing you can do, and some girls are going to have their interests either met through or thwarted by a boys’ club mentality. But I think, thankfully, that dynamic is starting to change—there are a lot of teen girl pop stars right now who are writing and performing their own songs.

Just think about all the 498,302,843,920 teenage girls who will get your book and know that they don't have to learn "Freebird." One of the most amazing things about the book is its thoroughness. You've been able to address this because you've been active in basically every tiny corner of the music universe that one can be active in—being in a band, recording, producing, being a publicist, a promoter, etc. Can you talk about some of the crap that you had to confront and say, "No, that is not right, I am doing this my way"?
I have been self-employed since I was 19, which kind of spoiled me; I won't do things I am not comfortable with. I interviewed Ian MacKaye when I was 18 or 19 and he said that in Fugazi, being an ethically guided band meant saying no to a lot of things. The idea that you do not have to conform to the standard idea of how you reach success guides the book. For me, personally, I started writing and doing a ‘zine when i was 15 because I didn’t like the way the local paper covered Babes in Toyland, and I felt like, as a true fan, I understood what made them special. There is nothing in the book that suggests that you should change your music to meet your audience’s tastes or considerations. This is not a how-to-write-pop-hits digest; it's really about expressing yourself through song, making art that is uniquely yours.

When you sat down and started to write, what was the process like?
It was hard. I really had to take myself out of my adult brain and mine my teenage experiences. All of the things that are givens for an adult musician don't exist for a 12-to-16-year old. They probably can’t drive, they probably do not have their own money, and if they do, there is not much of it. They may not have a place to practice, they are not totally in charge with that they do with their time, their parents may not be super supportive of them making noise in the house, etc. There are a lot of factors. Once I started writing the chapter sizes tripled. I would start writing something and realize that if we were going to put in this one thing, well, we needed a guide to guitars as well, and if we have that, well, we need one for drums and keyboards. Presenting a lot of info that is somewhat technical, so making it accessible but not talking down to the reader was my main goal. Playing music is fun, and so a book about playing music should be as fun, or at least reflect that.

Exactly. One thing that I know was not fun for you was going through all of the legal crap involved with the process of getting lyrics cleared.
I wrote the lyrics chapter spacing on the fact that I would have to clear use, and that I would have to pay for it. Turns out I used some of the hardest lyrics to clear—I wanted to use songs that everyone knows—so naturally, "Hotel California" and "Don't Stop Believing" were easy examples. To clear the Eagles lyrics, I had to write a personal appeal to Don [Henley] and Glen [Frey], include an overview of my written work/bio, an overview of the book, various legal forms, and the entire chapter in which they appear. Basically, like a 20-page fax. I had forgotten that on a previous page, I called “Hotel California” “so dumb that it's genius."

And they didn't like that too much, eh?
Their rep sent me back a note that said everything shy of "fuck you," and the last line was "Go insult Gordon Lightfoot," because I had used "Wreck of the Edmund Fitzgerald" as an example of songs with surprise endings on the same page as the Eagles content.

I had no idea about that.
I had to rewrite a bunch of stuff in that chapter down to fair use—two lines—because I did not know that, for example, you have to clear Journey lyrics with like, six different people, or that Thom Yorke approves all lyric usages personally, which is probably like thing #447 on his to-do list, right after "Write fan letter to Avril Lavigne”.

One last query, could you tell me about the making of the PSAs that you & the publisher released about the book?
I woke up with an idea one morning about taping a ShamWow to the back of the book, comparing its absorbency to that of Hemingway’s Old Man and the Sea, and it went from there. I met with my friend Alan Del Rio Ortiz, who does a lot of video work, and he said, "I think we should actually make six of these". He wrote the scripts for all of them in two days, although they wound up being largely improvised.