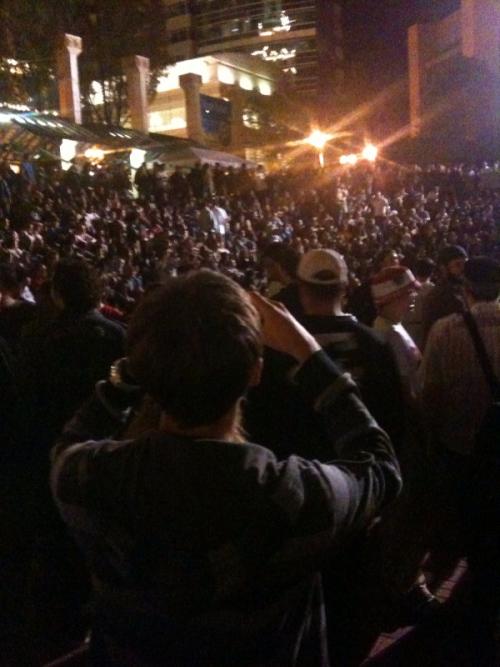 In the end, the mean thing to do would've been the funniest. Even if the joke were on us.

But it wasn't. Dave Chappelle did indeed show up... Only to forget the P.A. system.

A half-hour buildup became a dirge. Restless fans took to the stage for sad public displays of public pot smoking, possibly underage tits, certainly funky ones, misguided vandalism, and pathetic attempts at teenage aggression. (It should be noted, before the idiots took over there was on good joke of Chappelle-like sensibility: a young black guy took the stage, waving as if he were about to perform. Thousands started cheering like mad.) But when the fools really started camping out on the stage like it were theirs—as if they had something to offer—crowds started flocking back towards their homes.

I was one of them. I felt duped—even if it were politically poignant. With thoughts of "Bruno" fresh in my mind it seemed clear. Chappelle had staged a brilliant meta stunt: sucker some five-thousand privileged social networkers via Twitter and blogs to attend a fake event. Film it from the top of the Nines hotel, laughing their asses off. It seemed so perfect and obvious: Sasha Baron Cohen played on the idiocy of cherry picked civilians. But what if you could do it to a whole swath of the population? Especially the ruling class (or as least their sons and daughters).

Recently celebrity death Twitter hoaxes have made news—not so much as headlines themselves, but for people believing them. And so, could you imagine this: not tricked to simply click a link, but to show up somewhere at midnight on a Tuesday en mass?

The potential misdirect would've been tip-top meta in today's Real Comedy world. (I also heard that people were told Chappelle would perform at Suki's regular Tuesday night open mic, although this may have been the comedians own twist on rumor in hopes of driving traffic to their own event.)

Waiting around, we'd seen enough. (And really, why tear down banners on the stage set up to give free concerts in the afternoons? All that does, combined with loads of trash and trouble of tonight's wake, is make an event like this more difficult to pull off next time.) It'd been at least 30 or 40 minutes past, the supposed starting point. Before hopping on our bikes a friend and I decided we might as well ask a cop if he could share anything. He was leaning calmly and confidently against his patrol car near the MAX tracks.

"I wouldn't bet on it," he said towards the possibility of any jokes actually being told. "You know how the internet is." The officer concurred with Alison's earlier assertion that no public permits had been issued. "We just showed up because all the people did."

We began heading back to our bikes and a roar went up. And then it sustained. I could see him—that was indeed Dave Chappelle. (The sad part about this is, and maybe it's for another story, or just me, but I would've been exponentially happier for a comedian like Louis CK...)

The throngs were close, but what they perhaps should've said—and would scream soon-after—is "I CAN'T HEAR!"

Various other word-of-mouth reports came in throughout the preceding afternoon about witnessing or hearing Chappelle on his way to "buy a P.A. system." What Chappelle bought, unfortunately, was a practice amp.

No one, save the first few rows could hear. Well, they couldn't really hear because all the thousands of people who couldn't were screaming to turn it up. Some tried to quiet 'em and it didn't work. It was a fucking disaster and there wasn't much anyone could do about it.

Chappelle, to his credit, went on telling jokes—God knows what about. Somebody held the amp and would occasionally point it towards another neglected section of the audience, but with a stage surrounded 360 degrees by wound up kids, nothing worked. Few, if any heard the material. Practically speaking, the performance was pointless.

It was passed on to me that Chappelle acknowledged the absurdity of the situation to the crowd, asking people, "why are you still here?" or something to that effect. It was a venue that, without thousands of dollars in P.A. equipment, no comedian could've succeeded in.

My girlfriend, who is in town from Denver and has friends who know Chappelle, says he does these type of impromptu performances often there. Only in Denver, she says, he usually chooses comedy clubs and goes on unannounced. (Our only comedy club, well... that's another story.)

It's possible—and perhaps likely, judging by his choice of amp—Chappelle expected a much smaller crowd (as Charlie from Panther once did). But tonight Chappelle learned an important lesson in the speed and confluence of new media (also, how much fucking money he can make in Portland should he choose to return).

The imagined and ripe meta trick would've been something to remember, despite our being the punch line. What happened instead—a tease which Chappelle ultimately bears little responsibility for—is just sad.