Billionaires For Wealthcare At The MAC

The billionaires for wealthcare took over the sidewalk outside the richy-rich Multnomah Athletic Club—Portland's only gym with sanctions for "conservative" dress code violations—this morning, to protest about a meeting inside the club of Oregon health insurance chief executives.

"They're discussing health reform. I'm not joking," said Betsy Dillner, with Healthcare for America Now, which organized the protest. "Or at least, they're in there discussing their talking points about it."

A sergeant from central precinct swung by, introducing himself and asking "no arrests today?" The club wanted the protesters to stay off the property, on the sidewalk, he said. And no blocking of the entrance. That appeared to be just fine with them, as long as the officer would let them keep their billions. Would he let them keep their billions, I wondered? Evidently, he would.

"I'm just so upset that people are threatening our income," said Inde Nile, one of the billionaires. "I can no longer afford a full time mechanic, so my Jaguar is in the shop."

"And I'm about to lose my seventh vacation home," said Mora Yorbucks. "Why aren't these greedy poor people just buying insurance?" "I was glad to hear that 45,000 Americans are dying each year because they don't have insurance," she continued. "I mean, what are they doing for me?" 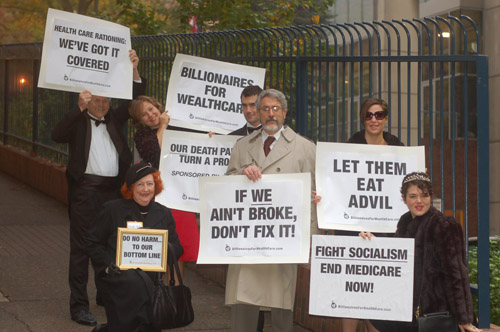 The Mercury asked the MAC representative if it could get in touch with a representative of the health insurance industry meeting for comment about the protest.

"I'm sorry, because it's a private club, I can't let you in," she said. Which is probably a better quote than I could have got from a spokesman, regardless.

It costs $4,900 for an individual to join the MAC, if you can beat the "lottery" system, although of course, there's an evidently much-needed affirmative action program, if you're not white.