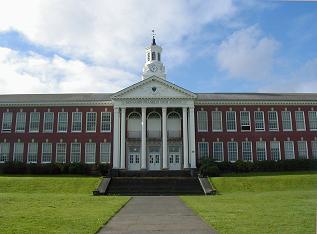 Sound the SE Portland alarm bells. As part of a major overhaul of Portland Public Schools (PSS) that administrators hope will improve equity and boost graduation rates, PPS is contemplating closing some public schools and shuffling students and classes to fewer, larger neighborhood schools. Potentially on the chopping block are Franklin and Marshall High.

That doesn't mean Franklin High School is failing; it's graduation rate is nearly 20 percent higher than Portland's city-wide. Marshall High's BizTech school isn't doing as well. According to The O, it's facing sanctions for missing No Child Left Behind targets two years running.

According to the Examiner, PPS will close either Marshall or Franklin by 2011.

A sure-to-be-tense public meeting about the future of Franklin High is going down this Thursday Dec. 17th at Franklin (5405 SE Woodward S) from 6:30-8 pm. PPS is definitely expecting a large turn-out: they've decided to also stream the meeting live on their website.

Slightly more info from PPS about the closures here.

Update 12:28 pm—Portland Public Schools spokesman Matt Shelby (who was unavailable for comment until noon) says the Examiner article about the closures is “not necessarily inaccurate, but incomplete.” All Portland’s schools, not just Franklin and Marshall, are facing the same discussion over whether they’ll be closed or restructured in some way. “We’re not talking about specific campus closures and we’re not trying to pit one schools against another.”

More on the PPS plan below the cut!

PPS is moving toward running fewer but larger “community comprehensive high schools” that would offer a more equal host of classes than the disparate levels of languages, AP classes and electives available at schools across the city right now. Before PPS starts talking about closures, they’re taking public input to define what a community comprehensive school would be like: what classes specifically would it need to offer to be “comprehensive” and how big could it be? Right now, PPS is assuming each future school will offer a full slate of AP classes and languages and serve 1,200 — 1,350 students (Franklin is just over 1000 right now and Grant is at 1600).

So in coming years, all of Portland’s high schools will either be turned into these larger, comprehensive schools, be turned into smaller magnet schools or be shut down. What’s the possibility of PPS closing a school like Franklin and selling off the land entirely? “I have not heard anybody talk about selling off any land,” says Shelby. Abandoned schools like Rose City Park could be used as “swing space”—housing students while their regular high schools are remodeled—says Shelby.

After this winter’s public meetings, like the one on Thursday, the PPS admins will make a recommendation to the school board about which schools should be changed and closed. The board will take a vote “soon after.”