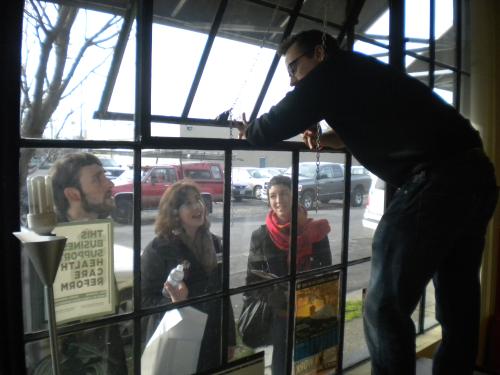 News editor Matt Davis just leapt up on an empty desk here in the newsroom, threw open the window and called out across the street to three familiar faces: young progressive politicos Henry Kraemer, Mollie Ruskin and Mariana Lindsay were outside loading up their car to canvass for Measure 66 and 67.

The three reported that over 400 people had gathered this morning at the Defend Oregon office (which is just around the corner from our own) for the kickoff of a county-wide canvass in support of the tax measures. 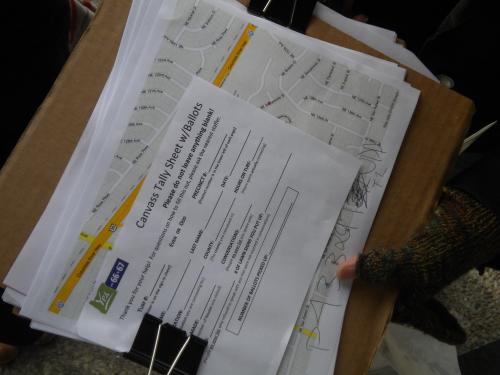 "I think it's great and really inspiring that so many people would come out to support the measures on their day off," Lindsay, 22, told us through the window. As discussed in in our endorsement, young voters are the most likely to support the tax measures, but also the least likely to turn in their ballots. Lindsay spent last week phonebanking for the measures with NARAL and had conversations that were across the board from one woman who said the taxes would "literally kill" her small-business-owning son to a Republican schoolteacher whose whole family planned to sit down and fill out their ballots as "yes" together.

Kraemer, political director for the Oregon Bus Project chimed in that his organization will be running pro-measure nonpartisan get-out-the-vote phone banks every night (except Saturday) from now until January 26th. Phone banking starts at 6 pm at the Bus HQ (333 SE 2nd Avenue), where there will be free beer and juice for volunteers. With that, the three packed their clipboards into their car and took off.

Congratulations, too, to Yes for Oregon communications director (and former Mercury reporter) Scott Moore, whose son Thurston Edward Apodaca Moore was born at 8:30 this morning, weighing in at 7 pounds 8 ounces. Moore Junior was expected after the election, but we hope his early arrival is an auspicious sign for the state.

Update 11:58 am: The Yes for Oregon campaign puts their official tally of canvassers out on the streets today at closer to 500 people.

Update 2:51 pm: The official Yes for Oregon canvasser tally across the county today is 700. Yikes. Are 700 canvassers more powerful than a front-page wrap around ad in the Oregonian?

The 50-Foot-Tall Murderous Aliens That Invaded Earth Last Year Are Starting to Retreat. Can We Please Get Back to Normal Now?