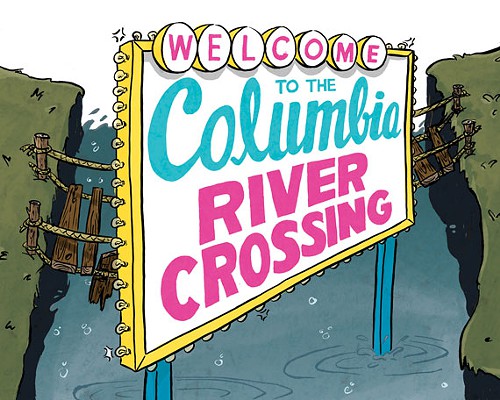 Mayor Sam Adams office wanted options for the Columbia River Crossing (CRC) other than the biggest, most expensive plan for the 12-lane bridge to Vancouver. But the CRC staff wasn't giving it to them. So on its own, the city hired a consulting firm to analyze what it would take to build a smaller, eight lane bridge. Today at the bigwig Project Sponsors Council meeting, the URS Consulting group presented its findings. Finally! An answer to what it would take to build a smaller bridge.

The current plan for the CRC is to build a bridge 12 lanes wide and stripe it for 10, with the plan to restripe it and expand car capacity at some point. But what the city's consultants found is that a ten lane bridge is nearly identical in terms of function and traffic to a 12 laner, the only real difference to adding two additional lanes is 30 minutes less congestion a day. But cutting two lanes saves $50 million. So that's 30 minutes of less traffic for $50 million of our tax dollars. Worth it?

"If you have an eight lane bridge, what can you do?" says Ted Rutledge, who presented the eight lane idea. "You've got to do something about the demand. This is not a matter of changing Hayden Island ramps, it's ultimately about changing patterns, behaviors and modes of travel."

Taking a bite out of the number of trips would mean aggressive tolling—an increase of rush hour tolls from $2 to $3 would reduce traffic by 15 percent.

The Sponsors Council responded to the new facts on the eight lane scenario with resounding skepticism. "Charging more for less isn't creating better cost benefit for the people who are paying it," summed up Clark County Commissioner Steve Stuart.

Mayor Adams, whose office commissioned the study, kept quiet during most of the debate, jumping in at the end to lay the smackdown on Washington State Transportation Secretary Paula Hammond.

"My concern about the eight lane is the huge step where you would have to artificially constrain or manage demand to an extent that I don't know is possible," said Hammond.

"I'm trying to move my city further in the direction of sustainability and it's not helpful to have you explain to people across the river that tools other than building freeway lanes is artificially constraining," said Adams.

Hammond hit back by bringing up jobs, "When you get to a point where it affects our economy, I feel like it's a nonstarter. For us, at least in the state of Washington, that's what this is about, economic vitality... To drive up the cost of tolls to the point where you create so much diversion or constrain people's ability to work in the region. We do agree with using tolls to manage demand to a certain extent, but when I hear 37 percent of the people who might want to use the bridge, we're trying to direct them otherwise, it concerns me. I can't see that future because I don't see one existing today."

And that, friends, is the CRC quote of the week: We can't see a future that doesn't exist today. More freeways it is!

The council did not vote on the eight lane idea, but, of course, the discussion over the bridge plan continues.